Has the coronavirus, reached Antarctica?
Could I go there to stay safe?

Is there Coronavirus, Covid-19 in Antarctica?

The last continent on earth to record a coronavirus case finally did so at the end of December in a year which saw the novel pandemic reach every other continent on the planet months earlier by the time it reached Antarctica, it had contaminated at least 78 million people in confirmed cases and caused over 1.7 million deaths.

36 people tested positive comprising 26 military personnel and 10 civilian contractors. The disease was carried by a ship travelling from Chile which was at the Chilean General Bernardo O'Higgins Riquelme Base at the tip of the Antarctic Peninsula. base from the 27th of November to the 10th of December. the outbreak is confined to that base.

Is the virus likely to spread within Antarctica? No, at least not from that particular base. Scientific stations in Antarctica are supplied from the north, from South America, Australia, New Zealand or South Africa, there is no or very little interaction or visits or exchange of personnel between bases on Antarctica.

By their normal way of working, Antarctic bases operate in what is effectively a state of quarantine. This will serve to isolate them from each other, they are more like extensions of the country which runs the base than as integral parts of the Antarctic continent as far as mingling and viral spread are concerned.

Can you live in Antarctica?

The sea ice around Antarctica grows by around an additional 18 million square kilometers in the winter.
The peak is in September or October and mimimum in January or February.

Antarctica was the only continent without covid-19

Antarctica is still one of the best places in the world to avoid covid-19.

There are only really two seasons in Antarctica, summer and winter, spring and autumn/fall are so brief and unpredictable that they are generally disregarded. Summer is October/November to March/April and the rest of the year is winter.

So can I go and isolate in Antarctica?

Everyone in Antarctica is currently on nationally run scientific stations which are entirely self-sufficient with enough food and supplies for at least a year and probably more.

These people all have specific specialized jobs that they were recruited for months or maybe up to a year ago. There are no "guests" so even if you could get there, you wouldn't be welcome and there would be no facilities for you.

There are about 1,000 people who overwinter in Antarctica each year and so are in isolation from the rest of the world on their own particular scientific station where there are anywhere from about 10 to 250 in total, though typically from 10-20 - and no, you can't join them this year!*

The distinction between summer and winter is made all the more clear to the winterers as summer means contact with the outside world in the form of flights and visits from ships whereas the winter means no such contacts for most of them, no-one in and no-one out. There are sometimes late winter or early summer flights in before the ships can arrive, but there is still period of several months of isolation. 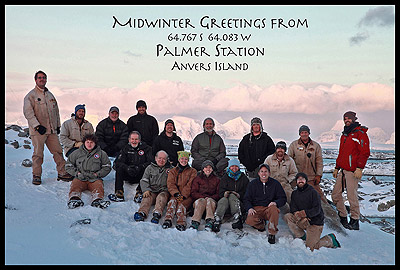 Palmer Station Midwinter Greetings, 21st of June, groups like this are co-incidentally isolated from coronavirus due to being in Antarctica over the winter where they would have been anyway (this picture from a few years ago). 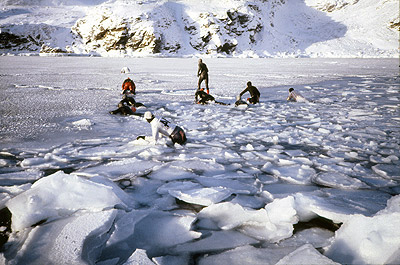 Early winter sports include a race across thin sea-ice and falling through a lot, it helps harden you up for what's to come. Fairly shortly afterwards the ice is far too thick to fall through.

* Well not this year anyway, but you could maybe next or in a couple of years time, find a job in Antarctica.

In the meantime, like most of the 7.7 billion people in the world who are not able to isolate themselves in Antarctica, remember to:

Self isolate at home if you think you have coronavirus.

Maintain social distancing from all except those you live with.

Stay away from extremely vulnerable people, the over 70's and those with underlying health problems.

Can you live in Antarctica?

Find a job in Antarctica