Flying over the Great Slave Lake

Just over 75% of the population of Canada live within 90 miles of the US border. This is the Great Slave Lake still ice covered on the 2nd of August 2010 and about 850 miles from the US border. For mile after mile from the air you see no signs of humanity at all.

The Great Slave lake is probably one of those places that you are vaguely aware of as a name but not as a place. It is 300 miles (480 km) long and covers an area of 10, 502 square miles (27,200 sq km). As a rough idea of its size, it dwarfs all the world's major cities, Tokyo - 8,014 km², New York - 17,844 km², London 11, 391 km² for example. It's not even the largest lake in the Province of the Northwest Territories of Canada. This was the first real sign that we were entering a place that is seriously different to where we had just come from.


Photo; © Paul Ward - These are pictures from a cruise to the High Arctic in high summer, from Resolute Bay, Canada to Kangerlussuaq, Greenland.

Tell me more about my trip to the Arctic! 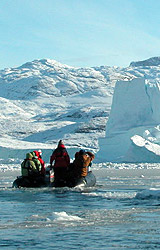 Land Based Polar Bear and Narwhal Watching in Canada
8 days