1 - The Forbidden Sector. No-one knows what happens here, no one who has been has ever come back, if you try to take a peek at the border you are grabbed by security penguins and taken in.

3 - The Wall Around the Hole at the Pole. This stops people from the Almost-South-Pole-Station from falling in the hole and keeps out immurgrunts.

4 - The Almost South Pole Station.  Because there's a big hole where the actual Pole should be (obvs) you can't build a research station there so instead it's nearby, this means it easy to keep an eye on all the ufo's and other alien technology that comes in and out of the hole.

5 - UFO Base. UFO technology was first established in Antarctica at the end of WW2 by the Nazis who did the obvious thing when they thought they might lose the war and moved to Antarctica to test-fly UFO's. They have been doing it ever since, secretly... 74 years so far and counting...

6 - Visitors Land. The magnetic fields in Antarctica are manipulated to cause compasses to lead everyone to this area wherever they think they are going and think they might be. This prevents anyone finding out about the secrets in Antarctica "They" don't want you to know about.

7 - Visitor Land Barrier. A big plywood barrier painted to look like distant mountains and icebergs that hides the rest of Antarctica behind it.

8 - Secret Nazi Submarine Base. Established at the end of WW2. A tunnel at the ice edge leads to a base built into a giant ice-cave hundreds of miles inland so submarines can come and go secretly on clandestine missions.

9 - Tropical Area. No-one would expect an area of tropical weather and rainforest in Antarctica, so that's exactly why one has been established and kept secret well away from prying eyes, you wouldn't guess it was here would you? clever eh? <taps side of nose>.

10 - The Pyramids of Antarctica. Built by an ancient and powerful race and hidden under the ice. Every now and then one of them pokes out accidentally and photographs are taken, but by the time anyone looks again, the snow is heaped back over it and it disappears from view. Also, some mountains look a bit pyramid like from some directions.

11- Land of The Ancient Race of Super-Beings With Big Angular Heads. Some of them tried to leave many years ago and made it to Easter Island where their enormous weight made them sink into the ground and a simple common bacterial infection turned them to stone. The bacterium cannot live in Antarctica so they continue their highly sophisticated secret society under the ice, just occasionally sending out for pizza.

Everything referred to on this map is made up, some of it by me, most of it by other people.

The most amazing part is that there people who believe this stuff is real and think there is a conspiracy to keep it all secret from everyone else in the world. There are books on it and of course endless youtube videos made by bloke-at-the-bus-stop-productions™ (or similar) who don't know what they are looking at and/or repeat lies from others or simply make up their own lies. It's really easy! I did it with some of the items above.

Often the most compelling "evidence" for the believers is that they haven't been there to see it for themselves and they probably haven't ever met anyone who has been to Antarctica therefore the truth is being kept from them. Well I've never been to Albuquerque and I've never met anyone who has been there, but I do believe it exists. Anyway, now you've met me (sort of) and I've been to Antarctica and I can tell you none of the above stuff is true - I would say that wouldn't I? ;o)

Big structures, rows of tanks, big holes into the ground, take off marks from ufo's etc.

Antarctica is a big mainly frozen place, the wind blows a lot, it snows, it thaws too sometimes, water expands when it freezes, ice that is over water can crack making unusual patterns. Google Maps and the like aren't real-time images, but may get updated without notice showing changes that are actually years apart. There are also things going on in Antarctica that don't get a lot of publicity and sometimes people can't be bothered to find out what they are, but that doesn't make them "secret" any more than it is secret that I just had a ham and cheese roll (doh! - now I've given it away).

Here's a couple of examples of Google mapping images of Antarctica that were misunderstood either genuinely or deliberately and had fantastical stories made up about them. This stuff gets online and even into the printed press.

If you put the co-ordinates into the highest resolution map of Antarctica ever made, REMA, what comes up is not a buried giant UFO, but the location of the German Kohnen Station a summer only research facility opened in 2000. You can't see those things on that map because it is a relief map whereas the Google image is a satellite picture, no-one is trying to keep it secret. If you look elsewhere on the REMA map, there are the positions of other research stations given, but no structures shown, though there are quite comprehensive drop-down information boxes.

You see that small rise in the ice at the top? That's a nunatak, the peak of a mountain that projects through the top of the ice. They make great landmarks on the smooth expanse of generally featureless ice and will be one of the reasons the station is where it is, because it makes it easier to find in less than ideal visibility. 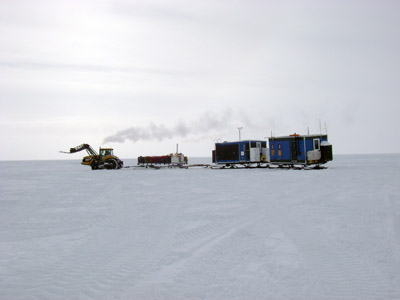 A tractor train similar to the one used to supply Kohnen

But that doesn't look like (hang-on, I'm going back to count) 22 things on the ice! Maybe it's a hidden UFO after all?

Kohnen Station is resupplied from Neumayer Station (also German) about 757km away by a convoy of vehicles twice a year. This convoy usually consists of 6 towing vehicles and 17 cargo sledges (that's 23 individual objects). As it is situated on a vast ice plateau, any vehicles, sledges and outside cargo will be arranged in a long line at 90° to the prevailing wind, an arrangement sometimes called a "berm". In this way snowdrifts build up in tails that stretch away from the object making it relatively easy to dig out any one without needing to clear any of the others. If they were stored closer together, much more snow could build up in and amongst the cargo and vehicles making finding stuff you knew was somewhere around there much harder to get to.

That original satellite picture is of vehicles, sledges and cargo laid out at 90° to the prevailing wind direction resulting in long wind tails of drifted snow. I suspect one reason that this gained traction in the press (apart from it being the absolutely laziest form of journalism possible and an over enthusiastic attention-seeking made up story), is that the station is German and the story appeared in the English language press. Otherwise some-one would have seen the pictures and said "Here, that's not a UFO, that's where our Gunter has gone to in the Antarctic" - or similar.

Here's one from 2017, though it keeps cropping up again as it is "rediscovered". This time, the assorted fantasists imagine it is an uncovered Motte and Bailey castle, a design of castle peculiar to 10-13th century Europe, except here is one apparently in that part of Antarctica directly south of Australia.

It's about 120m across which makes it of the appropriate size range and has two sort-of circles, though the whole thing appears to be more of less completely flat as against the having significant earthworks which in part define a Motte and Bailey castle, the mounds of such castles are particularly enduring across the centuries.

Europe has many, many examples of them, from the well preserved and in-use Windsor Castle in England to a whole range in various states of disrepair, though all with substantial earthworks.

Though when I think about it, why I am spending any time at all talking about about why two very rough concentric circles in Antarctica aren't an example of a medieval structure found on the other side of the world on the flimsiest of evidence. Maybe it's part of a deeper mystery? No it's just fanciful thought by people who have seen pictures of these two things and drawn a conclusion in the way that if you were a bit unusual, you might think the moon and hamburger were the same thing.

Those dark blue patches inside the rings are water above ice. The whole thing is probably a pond or shallow lake that has frozen over during the winter and now it is spring, it has drained to some extent, probably following the melting or washing away of a naturally formed "dam" or plug possibly at the mid-left where water seems to have left the ring. This has caused the surface ice to fall and crack in the pattern of two very rough circles . The cracks have allowed some of the remaining underlying water to flow over the top of the ice.

Such patterns and movements of ice and water are commonly seen wherever there is standing water with seasonal freezing. This explanation may not be exact as I haven't visited the site at ground level, but it is along the right lines and many similar examples of this phenomena can be found in the colder climates of the world. It is also a lot more accurate than some fanciful 1,000 year old castle belonging to a far distant culture, It really isn't a medieval European castle.

One particular favourite story of the conspiracy theorists (and of those exploiting them for gain and publicity) revolves around Nazi Germany, the establishment of secret bases in Antarctica before WW2 started and various efforts to discover and attack those bases by separate British and American missions.

This whole aspect of Antarctic Mystery stories was excellently debunked in a very thorough academic work from 2007.

Hitler's Antarctic Base: The Myth and the Reality Paperback Colin Summerhayes (Author), Peter Beeching (Author) download it from here

Warning - it will be disappointing to those hoping for confirmation of the mystery.