What status does Antarctica have in the international community?
Could it be a country in its own right?

What if Antarctica was a Country?

Antarctica is a Continent, not a Country

Antarctica is a large continental landmass without any indigenous peoples or permanent residents. Other than a few sail-by visits and possible unverified short landings in the 19th century (1800's) no-one really spent any time there until the first years of the early 20th century (1900's). It was and still is a difficult place to get to, has few economically exploitable resources, is impossible to farm and is a hard and uncomfortable place to live.

The only settlements currently, or ever, in Antarctica are scientific stations where people stay for a few months or (rarely) up to two years. These stations belong to individual counties and are run by them. They recruit people to live on the stations and supply them with all the food, fuel and other requirements they need to exist, these are delivered each year though each station has enough reserves for two or three years in case the supplies can't get through. There are around 40 of these scientific stations that are occupied year-round and another 35 occupied in the summer months only. They have a combined total of about 4,000 people in the summer and 1,000 in the winter, 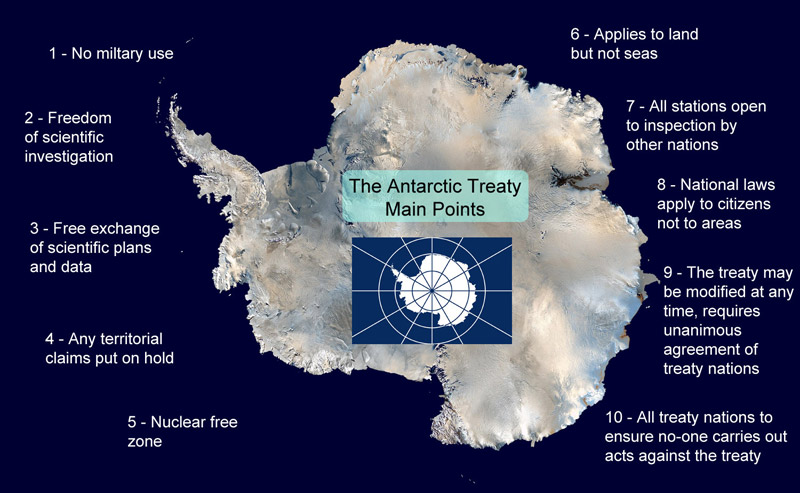 Antarctica is administered according to an international agreement that first went into force in 1961 called the Antarctic Treaty. Under the terms of the treaty only peaceful, non-polluting activities can take place that have minimal environmental impacts. In addition to this any national claims on the land of Antarctica are suspended so no part of it belongs to any one country, and any of the treaty nations can visit and inspect the facilities of any of the other nations to ensure compliance.

The combined result of the lack of any native Antarcticans whose ancestral home it was, the harsh physical environment, the isolation and difficulty to get there, the lack of any sustainable means of self support and the terms of the Antarctic treaty is that Antarctica could not become its own country in the foreseeable future.

The Antarctic Treaty ends in 2048. One of three things could happen, the current agreements could be extended exactly as they are, they could be altered by mutual agreement of all the signatory nations or it could be discarded completely for something, or nothing to replace it.

Could Antarctica Become a Country if the Treaty Ends?

In the short term it is very unlikely for the reasons described above. Hopefully the Treaty will be extended but if it isn't and it becomes a free-for-all there will be a period where different countries run their own stations and perhaps regions for their own purposes, whether this be a continuation of scientific study as at present, or some degree of exploitation.

Perhaps the biggest reason that Antarctica is not currently exploited for any resource is that there isn't anything that is easily and commercially available. While there are undoubtedly minerals in variety and quantity, they are all buried under miles of ice in remote regions in a permanently icy climate.

Yebbut What if Antarctica WAS a Country?

It would need other states to keep it supplied with essentials such as food and fuel and would need to find something, anything, to sell in return. Antarctica is such a difficult environment that living there means being a net importer of just about everything. The climate and remoteness means that it is considerably more expensive to live in Antarctica than just about anywhere else in the world.

Perhaps being a tax-haven might work? Though most of those are usually in warm and sunny places.

Antarctica attracts adventurous types and even then just for a limited time, something would have to change very significantly to make it attractive to larger numbers of people to live there permanently and that something isn't anywhere on even the most distant horizon at the moment.