Douglas Mawson - Australasian Antarctic Expedition 1911-1914 - page 1
The crew of the expedition  |  Who was Douglas Mawson? presentation

Douglas Mawson an Australian by adoption was offered a place on Scott's Terra Nova expedition but turned it down to lead the Australasian Antarctic Expedition of 1911 - 1914 sailing on the Aurora.

Though less prestigious, this was a wide ranging scientific and exploratory expedition to previously unknown and unvisited regions of the Antarctic continent. It included a dramatic sledging journey that Mawson undertook with two companions, he was to be the only survivor, against the odds in appalling conditions.

This is one of the most heroic and epic tales of Antarctic exploration. 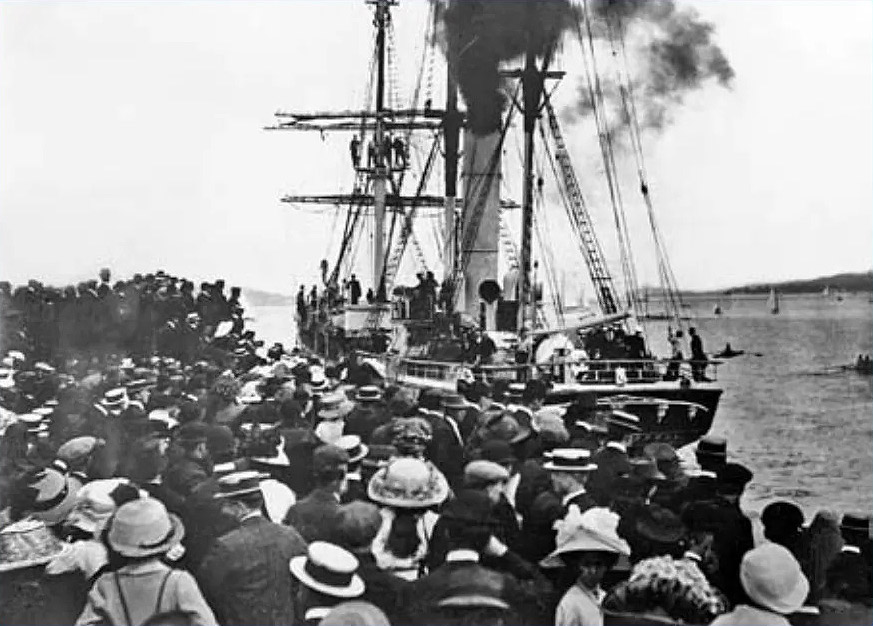 The Aurora seen from within a cavern of the Mertz Glacier Tongue, Commonwealth Bay, Adelie Land

Douglas Mawson was born in Yorkshire and moved to Australia as a boy. He studied geology at Sydney University and was appointed a lecturer at Adelaide University in 1905. He had been a part of Shackleton's 1907-09 Nimrod expedition when he was a part of a party that successfully reached the magnetic south pole along a difficult route.

Robert Scott had offered Mawson a coveted place on the Terra Nova expedition. Mawson turned this down, instead he was planning his own expedition to chart a 2000 mile stretch of Antarctic coastline directly south of Australia. The expedition was supported by the Australian Association for the Advancement of Science who contributed significant financial help.

The other members of the expedition were largely from Australian and New Zealand universities. The ship used was the Aurora originally built in Dundee and bought from Newfoundland, she was refitted in London before sailing to Hobart, Tasmania where the team members would board her.

The plans for the Australasian Antarctic Expedition were ambitious and far ranging in terms of scientific data to be gathered but did not involve any attempt to reach the south pole. Oceanic survey was planned and in particular a survey of Macquarie Island some 850 miles south east of Hobart.  The ship would then head for the Antarctic mainland where a hut would be built and equipped for a party to spend a year, another party would then be dropped off further along the coast and would then be picked up the following year.

The Aurora departed from Hobart on December 2nd 1911 for Macquarie Island. Characteristically for expeditions at this time in wooden sailing ships with auxiliary engine power, the rough seas encountered caused anxieties. The first night the wind rose to a full gale. Large quantities of deck cargo began moving around and the crew had their work cut out to secure the lashings in the teeth of the storm. A plug in one of the fresh water tanks was washed away and seawater rushed in resulting in the drinking supply being rationed afterwards.

Rough weather continued for the next few days and a huge wave carried away one side of the bridge (fortunately without any loss of life). Eventually the weather abated and on December 11th Macquarie Island was sighted. At the northern end of the island they came across the crew of a recently wrecked ship, the Clyde who could be returned to civilization by the auxiliary supply vessel, the Toroa that was following shortly behind the Aurora. Establishing a base on Macquarie Island was the first objective of the expedition, a base hut and wireless station were soon erected manned by a party from the Aurora which sailed again for the south on the 23rd of December.

They reached a place that Mawson named Commonwealth Bay on January 7th 1912. A boat was lowered and rowed towards shore. This was an area of a great concentration of wildlife, Weddell seals and Adelie penguins were abundant, the latter in thousands. This was the only point on the Antarctic continent that anyone had stood on in a distance of about 2000 miles, it was named Cape Denison and became the center of operations for the expedition. The Aurora was unloaded and work began on the building of the huts, the Aurora had to leave as soon as she could to drop another field party, the eight man "Western party" led by Frank Wild 1500 miles further along the coast.

It turned out that Mawson had found one of the windiest spots on earth to establish a base.

The winds grew in strength as the short Antarctic summer came to an end, by February anything that was not tied down was blown away. When the men left the safety of the huts it was vital to be wearing crampons - metal "claws" that fitted onto the bottom of their boots. Without them they would be in real danger. Calm days or even calm periods were so rare that ordinary outdoor activities had to be conducted in fierce winds. Through March and April the wind often gusted over 100 miles per hour and occasionally to over 200 miles per hour. The wind was to dominate the men's' lives in this place.

An attempt to make an exploratory journey was made by Mawson and two companions at the end of February, they managed five and a half miles before they thought better of the weather conditions and turned back to base once again. One of the projects of the expedition was to build a radio mast, a job started on April 4th but not completed until September 1st due to the weather, on October 13th the whole system was blown down, but not before signals were successfully sent to the Aurora and to Macquarie Island.

The long dark winter days were passed in routine and preparation work for the sledging season to come. In August a party of three led by Mawson struggled out and managed only five and a half miles before they dug an ice shelter where they left a supply depot, this was named Aladdin's Cave and later was further filled with supplies. Other sledging parties set out when the weather was more in their favour, one such party managed only two and half miles before returning, though one covered fifty miles before returning frostbitten and exhausted.

The crew of the Aurora  The SY Aurora


Mawson: And the Ice Men of the Heroic Age
Scott, Shackelton and Amundsen - Peter Fitzsimons


Home of the Blizzard
Douglas Mawson