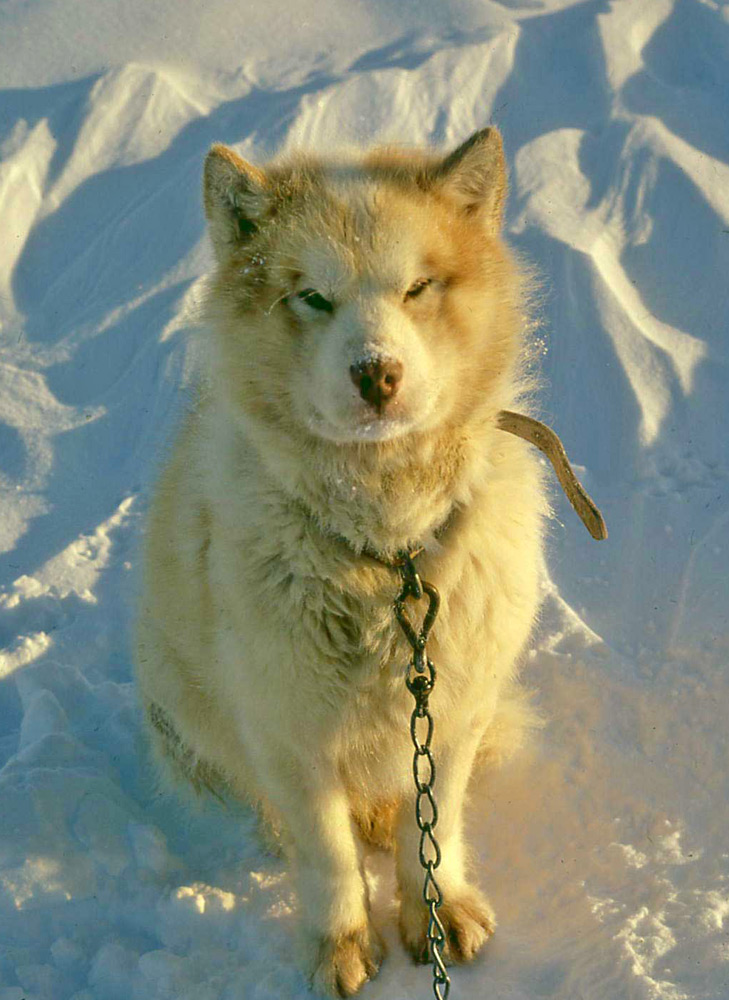 Briggs (brother to Stratton!*) was my heaviest dog and pulled in the back pair, closest to the sledge. When unfit he weighed in about 120 lbs which dropped to about 105-110 when he had run off some of his fat! He's not long off base in this shot hence the remains of some blubber attached to his fur. A complete escape artist he was capable of contorting his lower jaw enough to chew through his own collar.

*Briggs and Stratton are a British the manufacturers of small engines particularly used in lawnmowers though the latter are uncommon in Antarctica. 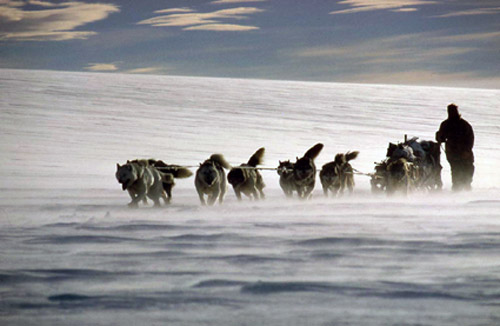 Pulling into drifting snow - Pulling into low drifting snow was always a demotivating experience for the dogs, as you can tell from the number of tails which are down. Much cleaning of eyes and a tendency for the team to turn away from the wind/drift . Not good for compass travel. This shot was taken on the west side of the Plateau in summer 1972/73 during a geophysics journey. BAS Sledge dogs were amazing but they were above all working dogs and cuteness wasn't a epithet I'd ever apply. Tough beyond belief, loyal, determined, frustrating, obstinate, belligerent certainly. They were total characters as well and all individuals although the pack hierarchy operated all the time. I probably learned more about management from my 9 dogs than I've learned since. - Drummy Small - Stonington 1971 - 73 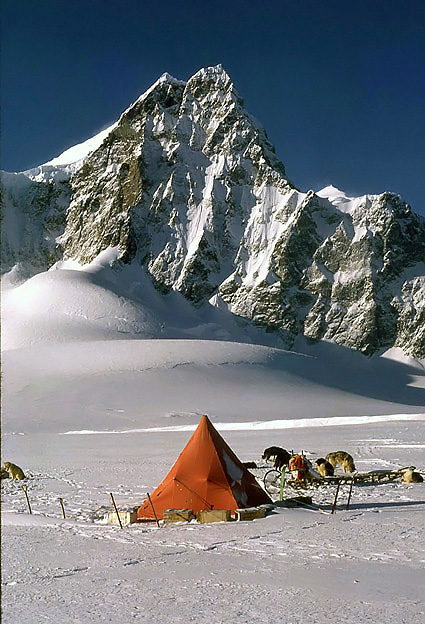 Deep Soft Snow - The bane of both dogs and drivers. This was taken in the Relay Hills to the south of the Wordie Ice Shelf. These hills are well named. It took us 13 days to travel 13 miles forward. Every mile was ski-led to break trail and we had to relay our loads. We actually travelled on only 5 of the 13 days due to bad weather and each mile forward involved a further 2 miles of relaying.

Dog Sledding - Antarctica - With scenery like this the photos take themselves

Field Camp - A typical camp layout with the two sledges parked parallel about 10 yards apart and the tent pitched in between. Here the dogs have been spanned on the wire night span (at right angles to the sledges) for those designated as chewers and on the rope main trace for non-chewers. Each dogs is on an individual trace with sufficient room to move around but not enough (in theory) to get at each other and start a fight.

Into camp at the end of the day - Taken in late afternoon on a (rare) sunny, calm, glorious day from a survey station on a nunatak at the bottom of the Swithinbank Glacier approx. 68S 66.45W. Shows geology unit (two teams) returning to our two tent campsite. Units comprised at least 2 dog teams (for safety) and either 2 or 3 men. The dog food which we carried and used in the field came in compressed blocks of meat and fat weighing about 1lb per block (I think) and in boxes weighing 70 lbs each which would last one team (9 dogs) for 5 days. It's trade name was Nutrican which was abbreviated to Nutty by the dog drivers. When away from base the dogs were fed nutty on a cycle of 1 block on even days and 2 blocks on odd days which was probably a starvation diet so we took any chance to feed them extra! On base they were fed seal meat in lumps of about 10-15 lbs each including blubber. - Drummy Small - Stonington 1971 - 73

Tuva - Antarctic Husky The oldest and most belligerent dog in the team. He would start a fight with his shadow. Started to suffer a bit from arthritis in my second year with the team but a great worker nonetheless, when he wasn't fighting with Nasr.

Nasr, Myrna and Hamad - Antarctic Huskies My team (7 dogs & 2 bitches) were called the Huns. Originally a team based at Adelaide Island they (and myself) went to Stonington Island for the autumn work journey in 1971 and never made it back to Adelaide. The BAS teams at Stonington pulled on a main-trace set up (4 pairs plus a leader out front) rather than a fan trace. These three are (left to right) Nasr, Myrna (leader) and Hamad (Nasr's brother).

Pancho and Castro - Antarctic Huskies My third pair (counting from the front of the main trace). Pancho (left) & Castro (right). One brain cell between the two of them but beautifully natured. Immense workers and real characters.

Pancho - Antarctic Husky Pancho never did learn to turn his head on a horizontal axis when he was in harness. If he wanted to tell me it was time to go, he would look back like this! In this shot the Huns are keen to get after the team in front. Putting one over on the team ahead by pulling really close behind them or even better along side was a bit of one-upmanship for the dogs but a definite breach of sledging etiquette.

Antarctic Plateau Edge at 5000 feet On the plateau edge at about 5000 feet. One of the hardest day's physical work I've ever done and rewarded with a scene like this!

Stonington Ice Ramp Miles Mosley (GA) and Tim Christie (Surv) with the Gaels. In the early 1970s, The access from Stonington Island was by a steep ice ramp which connected the island to the snout of the North East Glacier. In the two years I was at Stonington, the ramp diminished in width from over 100m to around 40m. The ramp was gone by the mid-late 70s when the dogs were 'phased out' (shot) and the base closed. Global warming?

Rita - Antarctic Husky Rita was the only other bitch in my team. She suffered from heatstroke in the summer months due to her dark fur and I sometimes had to build a mini-igloo for her to sleep in. Unknown to me she was pregnant when we left for the main summer journey in 1971. Rita ran in the team and pulled her weight until 2 hours before she pupped. She gave birth to a complete new team (6 dogs, 3 bitches) and was back in harness the next day

Morgan - Antarctic Husky - Morgan (son of my leader Myrna) ran with Briggs as 4th pair, right in front of the sledge. The dog sledge equivalent of the second row of a rugby scrum... the power house!

Spartans - Antarctic Huskies - 2 Leader and front pair of BAS team "The Spartans" from Stonington Island Base (Base E) hard at work on the west coast of the Peninsula above KGVI sound - Summer 1972. I agree (to a certain extent) with the environmental changes which have resulted in the removal of the dogs and a much greater effort to minimise man's impact on the continent, but I get very hot and bothered when people criticise the use of dogs. Without them the history of Antarctic exploration and development would have been totally different. When the environmental lobby started to get going in the early 1970s, the Stonners crew p***** ourselves laughing when the US representatives suggested we should provide details of all of the sledge campsites since the inception of FIDS as they considered them 'contaminated'. They also suggested that we should be collecting all of the dogs**t deposited on our journeys and return it to base for disposal. Even taking the coprophagous inclinations of sledge dogs into account we calculated that the average sledge unit would produce in the order of 10 lbs of dog & human s**t per day. By the end of the average summer journey (110-120 days) both sledges in the unit would have been fully loaded with c**p and no room for tents, gear, etc! I can just imagine the reaction of the BAS pilots then if we had depoted the c**p and asked them to fly it out to Adelaide/Rothera. - Drummy Small - Stonington 1971 - 73

Husky pictures page 2  |  The history of huskies in Antarctica