The fact that an opinion has been widely held is no evidence whatever that it is not utterly absurd.
- Bertrand Russell, 1872-1970
A wise man ... proportions his belief to the evidence - David Hume, 1711-1776

In the late 1930's, the Nazi's showed an interest in Antarctica and sent a expedition to survey a part of it and claim it for Germany, the claim was not continued but it sowed the seeds for a whole range of fantasies about secret things that might be going on.

What really did happen?

A little known German expedition to Antarctica from the 17th of December 1938 to the 12th of April 1939 on the ship MS Schwabenland had the purpose of claiming an area now known as Dronning Maud Land mainly to protect the German whaling industry. This area however had been previously explored by Norway and was formally claimed by the Norwegians in January 1939 after the Germans had set sail

MS Schwabenland, late 1930's, with one of two Dornier flying boats towards the stern which was launched by a steam catapult, on return it would land on the sea and taxi to the ship to be brought aboard by a crane.


The Schwabenland was equipped with a steam catapult and two Dornier Wal flying boats which were used to photographically survey 600,000 square kilometres. About a dozen aluminium flags were dropped from the aircraft at turning points of flight polygons and others were left by foot expeditions, none of these have ever been recovered. The land surveyed was claimed by Germany in August 1939 as "Neuschwabenland" named from the ship. The outbreak of war prevented two further planned expeditions and the possible building of a base, though most probably to the other side of Antarctica in the Pacific sector away from the Norwegian claim, the claim was abandoned in 1945.

There is no evidence of any further German activity in Antarctica during World War 2.

On the morning of the 10th of July 1945, the German U-boat U-530 arrived at the Argentine naval base at Mar del Plata near Buenos Aires, two months after the German surrender and the end of the war in Europe on the 8th of May 1945.

Rumours spread that it had brought Hitler, Eva Braun, Martin Bormann and others and had landed them on the coast of Patagonia or Antarctica before reaching Mar del Plata. A week later a Hungarian exile in Argentina, Ladislas Szabo wrote a detailed account in a local newspaper of how Hitler and his entourage had supposedly escaped Germany. The story quickly spread worldwide and versions of it appeared in other newspapers in many countries. On the 17th of August, another U boat, U-977 also arrived at Mar del Plata, further fuelling speculation.

The commanders of these U-boats and their crews were arrested and interrogated by naval personnel from Argentina, the USA and the UK, they all concluded that the arrivals were innocuous and the crews were released.

Two years later in 1947, Szabo published a book "Hitler is Alive" where he claimed these two U-boats had taken fleeing senior Nazis to Antarctica as part of a submarine convoy, the commander of U-977 in particular, Heinz Schaeffer denied this but the rumour still spread. In another version of the story, it is Hitler's ashes that were taken to Antarctica and placed in a special ice-cave along with Nazi treasure.

Szabo claimed a Nazi Antarctic base called "New Berchetesgaden" had been built in 1938-39, this idea has been taken up by several authors over the years often building on earlier embellishments with tales becoming ever more fantastical as time went on.

The submarine convoy and the "New Berchetesgaden" base both first appear when described by Szabo, there is no reference to either before his publications, subsequent publications refer to what he initially described and there has never been any evidence of either.

While the Germans were not active in Antarctica during the war, the British were. Great Britain had claimed the sector of Antarctica between 20°W and 80°W and to the South Pole in 1908, Argentina claimed pretty much the same section from the mid 1920's and so did Chile in 1940, Argentina and Chile were both friendly with Germany.

From February 1944 Great Britain occupied the region of their claim to rebut the competing claims from Argentina and Chile under the guise of obtaining information about German shipping raiders and U-boats in the region. A number of permanently manned bases were established to this end each with a handful of personnel under Operation Tabarin. Much scientific data was collected during this time and after the war, work continued as the Falkland Islands Dependencies Survey which later became the British Antarctic Survey.

Operation Highjump 1946-47 and Operation Windmill 1947-48 (the Antarctic summer seasons) were United States Navy operations with Highjump being the largest ever group to go to Antarctica consisting of 4,700 men, 13 ships and 33 aircraft. The main purpose was to prepare for and practice techniques for cold weather warfare in polar conditions while being diplomatically far away from the Arctic and Russia. It was primarily a military exercise with a number of other important objectives such as establishing a research station, investigating further potential base sites, extending the sovereignty of the Unites States to an extensive region of the continent, and surveying the electromagnetic, geological, hydrographical and other scientifically important aspects of the physical environment. 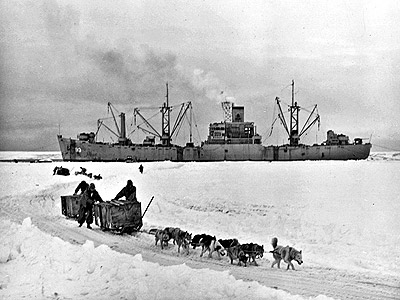 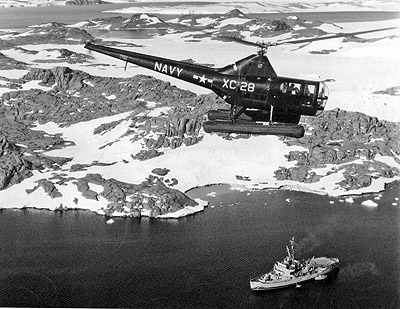 Operation Windmill, 1947-48, a Navy helicopter flying over the coast of Antarctica, the ship is either the USS Burton Island (AG-88) or the USS Edisto, AG-89.

Operation Windmill was a follow-up much smaller exercise the following year, an important part of which was to obtain ground references for the 70,000 aerial photographs taken during Highjump the previous year. Helicopters were used extensively, hence the name Windmill being given to the operation.

In August and September 1958, three nuclear explosions were detonated by the United States as part of Operation Argus over the South Atlantic between 38.5° and 49.5° south between 2,280 and 3,500km north of Antarctica to the southwest of South Africa. These were high altitude bursts and as might be expected at the time at the height of the Cold War were shrouded in secrecy, though they were reported soon afterwards in 1961.

Contortions of the Truth and Invented Narratives

As we have seen above, the evidence-free stories about a Nazi Base in Antarctica began within a week of a submarine turning up somewhere unexpected shortly after the Nazi surrender in 1945. The items I outline above are factual, though they have been used repeatedly as a scaffold to support all manner of fantasies that may or may not fit together.

There are a number of narratives from several authors which follow similar patterns with some variations. The basic story is that a German base in Antarctica was established just before the war by the Schwabenland, this was expanded during the war being regularly supplied by submarine deliveries, it was used to develop sophisticated secret weapons. This base was spied on by the British who attempted unsuccessfully to destroy it in an SAS raid in 1945. Operation Highjump was sent to attack the base, though they were repulsed by secret weapons (flying saucers are often mentioned), then eventually the base was destroyed by nuclear bombs in 1958. By the time of its eventual destruction the base is often described as being populated by hundreds or even thousands of people and defended by a range of sophisticated weaponry including the flying saucers. Of course all of the stories claim that there has been suppression of facts and evidence by the British, Americans and anyone else you care to name, the lack of evidence is therefore presented implicitly as evidence.

While a lack of evidence makes something much less likely, the absence of evidence is not the same as the evidence of absence. What follows is a short account of why the claims of a secret Nazi base are not only baseless (did you see what I did there?) but ridiculous. For a more in depth explanation and discussion, see:  Summerhayes and Beeching, (2007) Polar Record 43 (224): 1-21. Hitler's Antarctic Base: The Myth and the Reality download here

The Secret Nazi Antarctic Base

Different authors claim different building times and locations of the supposed Nazi base, sometimes it is described as being in a warm ice-free oasis with lakes, sometimes pictures of other areas are misrepresented or just plain faked.

There is a claim that the British set up a base called Maudheim-1 (there are no records) in Dronning Maud Land during the war to observe the apparent Nazi base, this was supposedly attacked by the Nazis in July 1945 followed by SAS led (failed) retaliatory attacks from October to December that year.

Did these U-boats visit Antarctica before turning up in Argentina two months after the end of the war in Europe?

It is claimed by several authors with no supporting evidence that the purpose of Operation Highjump (1946-47) was to destroy the supposed Nazi base in Dronning-Maud Land.

A sledge hammer to crack a nut maybe? Any sensible minded person wouldn't give the Nazi Antarctic base fantasy the time of day. The time it has taken me to write this page or for Messers. Summerhayes and Beeching to research and write their excellent paper debunking the ideas formally is arguably beyond what the effort is worth. After all, anyone who might consider such things as true is probably not going to bother reading a detailed analysis about why they can't possibly be so.

It is however satisfying to be able to address each particular claimed fantasy element as demonstrably false.

Quite often when presented with conspiracy theories with ridiculous and baseless claims we suspect that such a task could be undertaken, though the time taken can be onerous and so it generally doesn't happen. Here is one that shows what can be done with what has been a widespread and enduring fantasy over the years.

"One fool can ask more questions than seven wise men can answer."

Summerhayes and Beeching, (2007) Polar Record 43 (224): 1-21. Hitler's Antarctic Base: The Myth and the Reality - For a more in depth discussion of the matters on this page see this academic peer-reviewed paper with full references of the facts and events discussed.  download