Antarctica has 25 million cubic kilometers worth of ice, what might happen if it all melted?

What if all the ice melted in Antarctica? 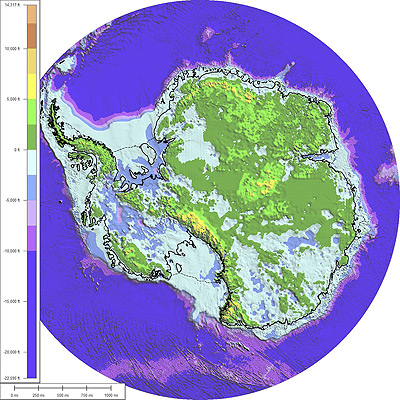 The bedrock of Antarctica under the ice, green to brown areas are above sea level, blue to purple are below 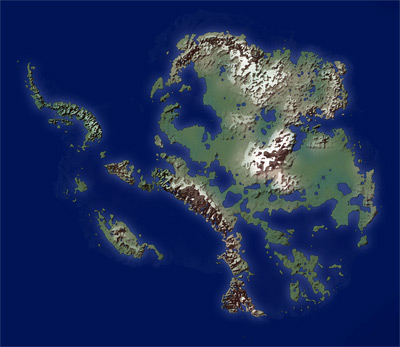 Antarctica as it would be seen if the ice were removed, this is the amount of the bedrock that is above sea level.

After isostatic rebound (see below).

If all the Antarctic ice melted it would raise the average sea level by about 70 m (230 feet) worldwide. This would change the map of the world as we know it as all coastlines would flood including the loss of all coastal cities in the world. Florida would disappear entirely along with most of Denmark, the Netherlands, Bangladesh, and many small island nations, some lower lying countries such as the UK and Uruguay would lose a significant proportion of their land area. Australia would gain a large inland sea. River estuaries would become much larger and they and the paths of their rivers would expand significantly inland drowning floodplains and many riverbank communities.

Billions of people, up to 40% of the world population would be displaced and have to move to higher ground.

Currently 98% of Antarctica is covered in permanent ice the now exposed Antarctica would reveal itself not as a single landmass but as a collection of islands some of which would be very large. If Antarctic ice melted, then Arctic ice would melt too exposing Greenland in a similar way as the current 80% ice cover disappeared compensating somewhat for the loss of land elsewhere.

A world map after a 70m sea level rise.

All of that melted ice is freshwater and not sea-ice meaning that it would dilute the worlds oceans making them less salty, but not just that, it would have an effect on other dissolved chemicals and the pH or acidity of the sea water. While these effects might be quite small, in the region of 2% on average, they will have an effect on some sensitive living creatures in the oceans and also on oceanic currents which in part are driven by changes in salinity as well as temperature. These would have very significant climatic effects of their own.

The effect of ice melting on ocean chemistry would be greater as it was melting than when it was mixed as the flood of freshwater would extend from Antarctica north having much greater local effects. The extent of the local effects would depend on the rate of the melting and hence the amount of mixing. Slow release over a long time period would reduce the effect.

The thermohaline circulation that distributes heat around the planet in the deep oceans, it is driven by salinity and temperature differences in the water, any change in either can upset the circulation, it takes about 2,000 years for a complete journey.

The earth consists of a patchwork of solid rock tectonic plates between about 50 and 200km thick floating on liquid rock beneath. Antarctica is currently like a heavily laden ship in the water due to the weight of all that ice on top of it. If the ice was removed the Antarctic plate would start to rise, a process known as isostatic rebound, just like taking heavy cargo off a ship. Of course we are talking about massive slabs of rock and magma here, so this rebound is slow, it would take tens of thousands of years to rise to a new equilibrium level. We know this because there are places in the Arctic, especially Northern Canada and Scandinavia that are still rebounding back 10,000 years after the last ice age pushed their rocks into the magma.

Foss a Siou waterfall in Southern Iceland. The water falls over what used to be a sea-cliff though is now inland due to isostatic rebound.

Entrance to Bathurst Inlet, Nunavut, Canada, the layers on the sandy beach are caused by isostatic rebound and the cliffs have been lifted and moved inland from being by the sea.

If we are considering a situation where all of the ice in Antarctica has melted, then it would mean that temperatures had risen way beyond any of the most extreme scenarios of climate change. The tropics would become uninhabitable for people as would some of the currently most populated parts of the world forcing everyone closer towards the poles and towards livable climates.

Crops would fail and ecosystems would be devastated, depending on the speed of the melting it would be a huge extinction event for all kinds of animal and plant species, a real apocalyptic scenario.

6 - The Last Time There Was no Antarctic Ice

The fossil record shows that the Antarctic ice sheet began to form about 35 million years ago (MYA), global temperatures were on average about 4C higher than they are today. One of the reasons for this was the isolation of Antarctica becoming positioned over the South Pole and the development of the Circumpolar Current due to South America drifting away and leaving a gap for the current to flow through. Antarctica became isolated from weather systems in the rest of the world.

Antarctica had been ice free for a long time, during the late cretaceous period about 90 million years ago it was covered with a swampy temperate rainforest similar to those found in New Zealand today, this was during the warmest period in the last 140 million years. Large parts of this forest would have been in darkness for many weeks or several months in the polar night. Carbon dioxide levels at that time were around 1,120-1,680 parts per million (ppm), they are currently (2022) at 418 ppm and rising at about 2 ppm per year.

There is a possibility that the Thwaites Glacier in Western Antarctica may collapse in the next several decades, this would add around 65cm (2 feet) to global sea-levels, this is not a certainty and the situation is being closely monitored both to find out what this glacier is doing and also for what we can learn about glacier and ice sheet collapse that could be applied elsewhere.

The West Antarctic Ice Sheet (WAIS) of which the Thwaites is part could also potentially collapse though over a longer time period and what will happen may not be clear until 2100 or later, this would raise global sea-levels by around 4m (13 feet).

8 - What are the Chances of All the Ice Melting in Antarctica ?

About zero, for the next several hundred years at least. The good news is that it's not going to happen any time soon even in the most extreme and unlikely predictions.