The most northerly of the Antarctic penguins, Gentoos are one of the most laid back, while they do have their noisy moments, particularly at nest building time, they are no where near as aggressive and raucous as Adelies and chinstraps for instance. By comparison a Gentoo colony is a calm and far more sedate place.

Estimated world population: - 387,000 breeding pairs, status not clear, may be decreasing or possibly increasing in the south of the range, there can be quite large year-to-year fluctuations in the population size. Colonies tend to be much smaller than other similar penguins, the largest has around 6,000 breeding pairs.

Feeding & diet: Opportunistic, krill, fish, squid, other crustaceans as available, tend to prefer feeding inshore near to the breeding colony.

Distribution: Circumpolar, the most northerly of the 4 Antarctic species. 80% are found in three locations, the Falkland Islands, South Georgia and the South Shetland Islands and the Antarctic Peninsula. The last 25 years have seen significant changes in population sizes in particular locations either growth or decline, overall the population is becoming somewhat more southerly. 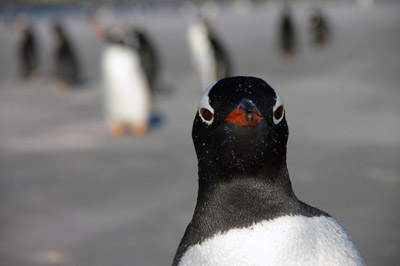 Gentoo penguins are the largest of the Pygoscelis penguins, though not by much, they average about 5.5kg and 71cm tall for the southern gentoo and about 6.2kg and 80cm tall for the slightly larger northern gentoo. The northern subspecies nests on and around the sub-Antarctic island of South Georgia, while the southern subspecies nests as far south as the Antarctic peninsula to 65 degrees south.

The picture above on the right shows a parent gentoo feeding its chick. The chick is very close to fledging judging by its size. Penguin chicks appear so large because they are covered in thick down before they gain their adult feathers so they frequently look bigger than the adults that they are feeding from, it's largely fluff though and once they shed the down and grow the adult feathers they seem to shrink a few sizes.

This feeding is clearly taking place away from the main colony. As the chicks get bigger they beg for food from almost any adult that comes their way. It is in the adults interest to only feed their own chicks, so there is often a chase right through and away from the colony with much calling to each other while the adult establishes that this really is their chick.

A feature seen in this photograph that surprises people is how green some bits of Antarctica can appear away from the snow and ice. This area is covered in snow and ice in the winter, but in the warmer months, this melts exposing rocks and in places, an extensive carpet of moss (not grass), large expanses of green can also turn out on closer inspection to be lichens growing on the bare rock.

More about nests and chicks

In the left hand picture, You can just about make out under the parent that the egg has cracked and there's an as yet upside down foot as the hatchling struggles out of its shell.

Gentoo penguins are the last to arrive on their nesting sites at the southern limits of their range. Unlike other species that nest alongside them nearer to the Antarctic mainland, they wait until the sea ice has retreated before heading for the nesting grounds.

If a penguin sitting on its nest can get a peck at a nearby or passing penguin, then it will usually do so. The resulting spacing is that penguins sitting on adjacent nests are just that bit too far away to reach each other, so neither feels immediately threatened and peace ensues. The same idea applies in the English Parliament House of Commons where the government and opposition benches are situated just over two sword lengths apart, should the honourable gentlemen decide to circumvent the electorate in the days when that sort of thing went on.

The down side of this arrangement is that when a penguin wants to leave the nest to go fishing, or if it's coming back from fishing, it becomes in range of both beaks from the adjacent nests when walking through the colony. So for the time from arrival at the colony in the spring to when the chicks have grown up a bit and hang around off the nest in "crÃƒÆ’Ã‚Â¨ches", coming and going can be quite painful for these hardy birds.

Looking as cute as any baby bird can, penguin chicks of this age are food processing machines. With a relatively late start to the season compared to many other birds and the need to leave early before it begins to get cold with the threat of sea-ice arriving, Antarctic animals have to grow fast to survive.

These pictures taken with only a moderate telephoto lens shows how close you can get to the nest without disturbing the penguins or chicks. These were taken on Signy Island in the South Orkneys group where the only humans that the wildlife encountered were occasional scientists who lived at the scientific base elsewhere on the island. Increasing tourist pressure on certain regions of Antarctica, particularly around the Antarctic Peninsula mean that for many people who visit the Antarctic, it is not possible to take such pictures. If the tourists that visited were allowed to get this close to the wildlife on a regular basis, the wildlife would soon up sticks (or stones) and disappear.

There area a number of long term scientific projects in the Antarctic one of them being an annual survey of penguin numbers and breeding success at specific breeding areas. Theis picture shows such a survey of a penguin colony on Signy Island in the South Orkneys group.

As they look rather similar it's not easy to know which penguins you've counted and which you haven't. So the answer is to use very dilute paint and tie a brush to the end of a stick, giving each counted penguin a splodge as you count them. The problem on this day was that the rather wet snow that fell meant that the paint mark that was supposed to wash off the next time the penguin went swimming, lasted only a few minutes instead. It didn't make it any easier that the penguins kept laying down and hiding their paint marks as they tried to shield themselves from the worst of the snow.

These gentoos are youngsters that have only just moulted their juvenile down and have grown their first ever adult plumage, the penguin equivalent of young teenagers.

It was a calm, mild day and nearly all of the adult birds were off fishing in the favourable conditions leaving the youngsters behind in their crÃƒÆ’Ã‚Â¨che. These young birds had never been in the sea before and they decided pretty much altogether that it was time to learn to swim and so they all waddled down to the shore-line where there was a very gentle swell with waves of just an inch or two high coming in - ideal conditions.

Unlike seals, penguins learn to swim without their parents and these started off paddling in the shallows. Some of the less adventurous ones mis-timing the waves and suddenly getting about two inches of water over their feet would turn round and run back up the beach flippers outstretched in considerable horror. Eventually, they did all end up standing around in the water like a collection of matronly old aunts "taking the waters", they'd go in up their waists (or where the waist would be if they had one) and look quite pleased with themselves waving their flippers around a bit. Every now and then, one of those pesky waves would come again and take them by surprise, so it was jump up, flippers out and all rush out of the sea again. All in all it was about half an hour before they were all standing in the water and appeared to be anything like comfortable with being there.

A few of them laid down in water about 2 or 3 inches deep and put their beak in the water, a bit like children daring themselves to put their face in the water, then over the next half an hour or so, they moved back out of the sea and went back to wait for mum and dad to come with an after-dip snack.