A contender for being the first to discover Antarctica. The expedition arose following the discovery the previous year of the South Shetland Islands by merchant captain William Smith. Presenting this discovery in Valpariso Chile to British Royal Navy Captain Shirreff an exploratory expedition was soon organised to confirm Smith's findings, to "go on a voyage of discovery towards the South Pole" and to find if the natives were friendly and willing to trade. Irishman Bransfield was in the right place at the right time and chosen to command a ship, a brig called Williams.

The brig Williams, January 1820 by the Trinity Peninsula Antarctica

Edward Bransfield and the Discovery of Antarctica

In 1819, 28 year old Englishman William Smith was captain of a small ship of 216 tons, 25m long that he owned in partnership with three others, a brig called the Williams (so named because three of the four owners were all called William) on a merchant voyage carrying cargo from Buenos Aires on the east coast of South America to Valparaiso on the west coast. This involved rounding Cape Horn and in hope of finding more favourable winds to speed his progress, he headed further south than usual. On the 19th of February 1819, Smith sighted land but did not investigate further.

He reported this to Captain William Shirreff of the British Pacific Squadron on arrival in Valparaiso but it was dismissed as most probably ice and not land at all. On the return voyage back to the east coast in May 1819, Smith deliberately sailed to the far south to try and find this land again, he was prevented by ice and poor weather from doing so. Later that year he made a third voyage to the far south going westwards, and on October the 15th found it again, to make certain of it being land he went ashore on the 17th and claimed it for his country calling it New South Britain, later renamed the South Shetland Islands. Back at Valparaiso again he this time convinced Sherriff of his discovery.

Shirreff quickly hired the Williams and prepared a secret expedition to investigate further. He appointed Edward Bransfield an officer from his ship the Andromache, as Master and Commander of the Williams, probably his first command at the time with 29 men under him. He was to confirm Smith's findings, explore and chart the new lands, "go on a voyage of discovery towards the South Pole" and find out if the natives were friendly and willing to trade, an indication of how little was known about Antarctica at the time. The ship was fitted for a 12 month voyage

Bransfield's own account of the expedition was lost and little was known of the voyage until the 1990's when the journal of a midshipman on the Williams, Charles Poynter was found.

The sailed south past Cape Horn and into the Drake Passage, an area that was known in terms of lines of latitude as the Roaring Forties, Furious Fifties and Screaming Sixties, before long the extremes of weather had caused damage to their ship. By the 16th of January 1820 they reached and surveyed Smith's islands he had discovered and landed on just three months previously. They sailed on into unknown waters with the extra dangers of ice and cold. Through the drifting fog that lifted briefly on the 30th of January they saw before them a mountain range covered in snow and glaciers extending in both directions away from them.

Poynter in his journal says:

They called the land they had seen Trinity Land (now the Trinity Peninsula) The fog once again descended and the ship continued charting and describing what it could. On the 19th of March they headed north again arriving back in Valparaiso on the 16th of April 1820 having spent 64 days exploring the Antarctic seas.

On return to Valparaiso all the records and samples of the expedition were handed over to the senior officer at the time, a Captain Searle, unfortunately all but a few charts have been lost. In a letter Bransfield said:

I beg leave to offer my services to finish it [exploration of the region] in the next Season, being of the opinion there is a great deal more to be done."

There never was a follow up expedition and it was not until 1840 that Antarctica was first conformed to be a continent.

The brig Williams in Antarctic seas

Edward Bransfield was born in the small seaside village of Ballinacurra, County Cork in about 1785, this date is extrapolated from the given age on his death certificate. The first record of Edward is in 1803 when he turns up in the records of the Royal Navy. His will shows that he had at least one brother, William and parish records show a number of Bransfield's living in Ballinacurra in the early part of the 1800's though none by the 1901 census, some at least emigrated to Massachusetts in America, where descendants of William still live.

In the early 19th century Britain was at war with France and needed over 100,000 men for its campaign. It was the time of British Royal Navy press gangs, such gangs were very active on the Cork coast, many of the young men made their living from the sea in some way and made potentially good sailors for the navy. According to the muster books Edward Bransfield was "prest" into service (against his will) on the 2nd June 1803 when he was 18 years old, he was initially held on a tender Louisa, before being transferred to the frigate HMS Dryad probably in or near Cork Harbour, and then on to the 110 gun ship of the line HMS Ville de Paris which later took part in the blockade of the French port of Brest.

On the muster book of the Ville de Paris Bransfield is entered as an "Ordinary Seaman" so he had at least a year or two prior experience at sea. Within a year he was promoted to Able Bodied Seaman. In 1806 he joined HMS Royal Sovereign where by 1808 he was a Midshipman, by 1813 he was a ship's Master on HMS Goldfinch. On the 27th August 1816 at the age of 31 showed his bravery and skill as a ship's Master and navigator on HMS Severn during the Bombardment of Algiers, he was decorated for his actions that day and his Captain praised him as "a very clever and attentive man".

Following the Napoleonic wars, like tens of thousands of men in the British Royal Navy, Bransfield was stood down on half pay. He wrote to the British Admiralty in August 1817, asking if he could be posted to "any ship going on discovery" to test his theory of calculating Longitude. "if there is anything going Foreign or in time likely to go which is to be entrusted to the case of a Master that I may be appointed, or any vessel going on Discovery, I would be happy to offer my service ... Nautical Pursuits together with the dislike for an inactive life being the cause of my perseverance". Two months later, against stiff competition, he found himself heading to Valparaiso in Chile as Master on board the HMS Andromache under Captain William Henry Shirreff as part of The Pacific Squadron. This was established in 1813 to support British interests along the eastern shores of the Pacific and  based at Valparaiso, Chile on the western side of South America. It was while stationed in Valparaiso that Bransfield became involved in the Antarctic Expedition from December 1819 to March 1820.

Bransfield left the navy in 1821 but was retained on a pension, very little is known of his life after this. He asked for leave to take up posts in the merchant navy as Master or Captain on at least four occasions and returned to South America. He was associated with the coastguard at Lancing in West Sussex, England. In one of the only surviving letters written by Bransfield in 1839 he responded to a request from John Brown, a geographer and friend of James Weddell, for information about Weddell's early career. Bransfield replied stated "I do not have the slightest knowledge of Mr. Weddell's early career " I have only been twice in his company and that's since his last voyage."

There is evidence that he invested in merchant shipping, his will indicates that he lived in relative comfort. He settled in Brighton on the south coast of England with his third wife, Anne, and he died there in 1852 aged about 67 without a family. There is a very brief mention of his death in the newspapers of the time. The original epitaph on his grave says nothing of his achievements and by the time the great Scottish Antarctic explorer William Speirs Bruce, who was a big fan of Bransfield, went looking for it almost 100 years later in 1917 the grave had become completely overgrown and forgotten. Bruce intended to hold centenary celebrations of Bransfield's discovery of the Antarctic in 1920 though ill health prevented it.

There is no known picture of Edward Bransfield, he lived at a time before photography was very advanced and there is no drawn or painted portrait of him yet found.

A monument to Edward Bransfield and other Irish Antarctic explorers erected at the entrance to the village of his birth in January 2020, 200 years after Bransfield and the crew of the Williams first sighted the Antarctic mainland.

Back of the Bransfield Monument 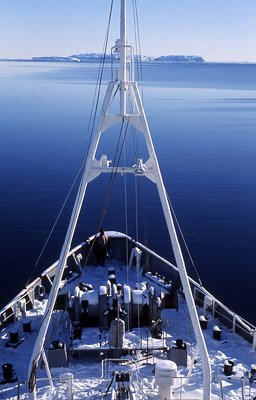 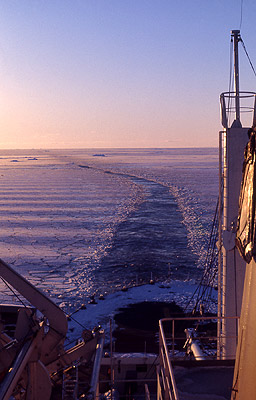 On her maiden voyage in 1971, left at the entrance to the Weddell Sea, unusually ice-free, right, breaking through light sea ice. These are places where the Williams will probably have visited, though being a small sailing ship would be turned back by the sea-ice rather than being able to break through it. Pictures courtesy Drummond Small

Credits. All material including copyright pictures used by permission Jim Wilson and the Remembering Edward Bransfield project unless otherwise stated.