Born London in 1880 into a wealthy family, Oates attended Eton College for two years before attending an army "crammer" school and joining the army in 1898. He served in the Boer War with distinction, a gunshot wound to his left leg left it an inch shorter than the right and causing him to walk with a limp. Sometimes known as "Titus" or "The Soldier".

He applied to Scott to join the Terra Nova Expedition and was accepted because of his expertise with horses, his role was to look after the 19 ponies intended for sledge hauling. Oates contributed £1,000 (worth about £116,000 in 2018) to the expedition.

He was rather disparaging about the quality of the ponies that Scott had bought, of Scott's lack of expertise in his endeavour and at times of Scott himself.

Oates was involved with depot laying in January-March 1911 as preparation for the south pole attempt later in the year. Starting in November 1911 he accompanied Scott's Polar Party initially by leading a very difficult to handle pony named Christopher pulling a sledge of supplies. At the top of the Beardmore Glacier Scott selected Oates to be one of the 5 man South Pole Party. Upon reaching the pole on the 17th of January 1912, they found Amundsen's Norwegian flag and tent already there.

All five men of the polar part died on the return journey from the pole.

Captain Lawrence Oates with some of the ponies taken to Antarctica by Scott on board the Terra Nova.

Titus Oates at the expedition hut.

Oates (r) and Meares
by the blubber stove

Soldier Oates and Meares
by flashlight on sea ice 4 June 1911.

How did Captain Oates die?

Along with Evans, Oates weakened faster than the other men in the polar party being particularly affected by frostbite in his feet and then his hands.

Oates walked with a pronounced limp as a result of a war wound that left him with his left leg being an inch shorter than the right leg. It was his injured leg that began to give trouble, probably the old injury making him more susceptible to cold temperatures.

All dated quotations on this page are from Scott's diary.

Oates seems to be feeling the cold and fatigue more than the rest of us...
Jan 14th 1912

I don't like the easy way in which Oates and Evans get frostbitten.
Jan 24th 1912

At this point on the return journey, Bowers, Scott and Wilson were managing relatively well though all of the men were suffering the slow relentless effects of insufficient food for their daily exertions.

There is some speculation and claims that the war wound to Oates leg may have been giving him trouble due to the effects of scurvy, even as far as re-opening as old wounds are reputed to do in the later stages. This is at best unproven. While the early effects of scurvy may have be manifest in all of the men due to the lack of vitamin C in their diet, it takes a long time to develop fully and they probably weren't without vitamin C for long enough for it to have been other than a somewhat contributory factor to their problems.

The troubles with frostbitten feet stems in part from the insulating boots they had which were finnesko reindeer skin boots lined with a particularly fine form of dried sedge called sennegrass. These are soft boots from Lapland, they are very effective in cold climates but not suitable for harder work such as marching everyday. They would wear out quite quickly, the sennegrass would flatten down and they would need to be replaced, eventually there were no more replacements to be had.

Oates continued to suffer from frostbitten feet for some time before things became too difficult to put without it becoming apparent to the other men.

The result is telling on all, but mainly on Oates, whose feet are in a wretched condition. One swelled up tremendously last night and he is very lame this morning.
March 5th 1912

Oates began to slow the group down now as Evans had earlier.

Soldier has become a terrible hindrance, though he does his utmost and suffers much I fear.
March 5th 1912

Poor Oates is unable to pull, sits on the sledge when we are track-searching - he is wonderfully plucky, as his feet must be giving him great pain. He makes no complaint, but his spirits only come up in spurts now, and he grows more silent in the tent.
March 6th 1912

Scott continues to mention Oates in his diary almost on a daily basis repeating similar themes. The following entry indicates a problem with the finnesko in that they hold moisture through the day that freezes hard overnight when they are taken off. The next day they can only be put only slowly as the ice is thawed slowly by body heat as they are softened and put on a little at a time. Oates has the hardest job of all, probably due to frostbite and by now gangrene meaning poor or in part, no circulation to his feet.

Worse and worse in morning; poor Oates' left foot can never last out, and time over foot gear something awful. Have to wait in night foot gear for nearly an hour before I start changing, and then am generally first to be ready.
March 8th 1912

The reality of the situation and what will happen becomes apparent to all the party.

Oates' foot worse. He has rare pluck and must know that he can never get through. He asked Wilson if he had a chance this morning, and of course Bill had to say he didn't know. In point of fact he has none. Apart from him, if he went under now, I doubt whether we could get through. With great care we might have a dog's chance, but no more.
March 10th 1912

Titus Oates is very near the end, one feels. What we or he will do, God only knows. We discussed the matter after breakfast; he is a brave fine fellow and understands the situation, but he practically asked for advice. Nothing could be said but to urge him to march as long as he could.
March 11th 1912

Oates not pulling much, and now with hands as well as feet pretty well useless.
March 12th 1912

Tragedy all along the line. At lunch, the day before yesterday, poor Titus Oates said he couldn't go on; he proposed we should leave him in his sleeping-bag. That we could not do, and induced him to come on, on the afternoon march. In spite of its awful nature for him he struggled on and we made a few miles. At night he was worse and we knew the end had come.

Should this be found I want these facts recorded. Oates' last thoughts were of his Mother, but immediately before he took pride in thinking that his regiment would be pleased with the bold way in which he met his death. We can testify to his bravery. He has borne intense suffering for weeks without complaint, and to the very last was able and willing to discuss outside subjects. He did not - would not - give up hope to the very end. He was a brave soul. This was the end.

He slept through the night before last, hoping not to wake; but he woke in the morning - yesterday. It was blowing a blizzard. He said:

"I am just going outside and may be some time."

He went out into the blizzard and we have not seen him since.

I take this opportunity of saying that we have stuck to our sick companions to the last. In case of Edgar Evans, when absolutely out of food and he lay insensible, the safety of the remainder seemed to demand his abandonment, but Providence mercifully removed him at this critical moment. He died a natural death, and we did not leave him till two hours after his death. We knew that poor Oates was walking to his death, but though we tried to dissuade him, we knew it was the act of a brave man and an English gentleman. We all hope to meet the end with a similar spirit, and assuredly the end is not far.
March 16th or 17th (Scott says that he was losing track of the days, he thought the 17th most likely)

A large snow cairn built over the final camp and the
bodies of Scott, Bowers and Wilson on the Great Ice
Barrier (now called the Ross Ice Shelf), 12th November
1912.

Oates walked out into a blizzard with the temperature at -40C (-40F) never to be seen again, neither was his body found when the tent with Bowers, Scott and Wilson was found later that year in November 1912.

Because of the difficulty in pulling on frozen finnesko, Oates walked out in his socks.

A cairn was erected with a cross inscribed:

"Hereabouts died a very gallant gentleman, Captain L. E. G. Oates, of the Inniskilling Dragoons. In March 1912, returning from the Pole, he walked willingly to his death in a blizzard, to try and save his comrades, beset by hardships."

He died of hypothermia, after a long period of slow starvation and the effects of frostbite, gangrene (his foot) and probably scurvy.

On what date did Oates die?

In some accounts, the date of Oates death is given as the 17th of March which will have been the day of his 32nd birthday. In his diary however Scott writes of Oates sacrifice in an entry dated:

In the entry he writes of the events of the previous day, which places Oates death as probably the 16th of March or possibly the 15th, but not the 17th, hence I have given the date as the 16th.

References to Lawrence Oates by Scott in "Scott's Last Expedition"

Type: Glacier
Latitude: 76°25'00S
Longitude: 162°35'00E
Description: An extensive lowland ice sheet E of the Kirkwood Range, occupying the whole of the coastal platform between the Fry and Mawson Glaciers in Victoria Land. Surveyed in 1957 and named by the New Zealand Northern Survey Party of the Commonwealth Trans-Antarctic Expedition (CTAE) (1956-58).

Type: Beach
Latitude: 69°30'00S
Longitude: 159°00'00E
Description: That portion of the coast of Antarctica between Cape Hudson and Cape Williams. The eastern portion of this coast was discovered in February 1911 by Lieutenant Harry Pennell, Royal Navy (RN), commander of the expedition ship Terra Nova during the British Antarctic Expedition (BrAE), 1910-13.

Oates Canyon - An undersea canyon on the continental rise east of Iselin Bank named in association with Oates Coast.


Other Crew of the Terra Nova Expedition 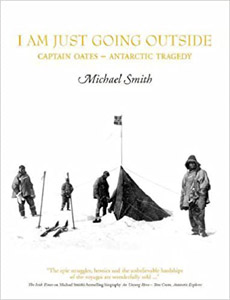 Captain Oates
I am Just Going Outside
Michael Smith
biography