Please register to include your details on this page  |  Database of all BAS winterers  |  Who runs Cool Antarctica?

Capt Ric Airey, SG, Adelaide, Rothera, etc. - 1974-1980 - Edinburgh, Scotland    Out of the ether, all you lovely people, hello and well met, hope every one still clinging to the wreckage, they finally found me out after 32 years in the air and grounded me, flew south with American cousins but BAS wont have me not surprising with mother superior still in charge grin, she's done well for a primary school teacher with a rubber fetish. Damn it i have missed you all wonder where Mex Merson, Howard Platt, Gerry Lawson are now .ref history being r/o skeletons I can do particularly the funny ones see doggerel BAS club letter 34 , also why is Nigel Leader-Williams not yet prime minster, and Howard my dads still alive and still my hero. Sea ice fast and plateau clear sledge dog days remain most dear xxricxx

Tim Allerton (1983 - 1984) - London   Hi I spend 83-84 on Bransfield and Rothera base as Electrical engineer would like to get re-connected with any of the team from that era.

Andy Denley  (1979-81, Rothera and Faraday) West Hoathly, Sussex    I was a mere lad of 19 when I arrived as a green WOM at Argie. My parents hardly recognised me when I got back after after two summers and winter away. I got the impression at first they would rather I went straight back! Grand times. Possibly the best job I ever had. Andy's book "You don't have to be tough to be rough" is available from Amazon, profits to Sussex Cancer Relief fund.

Chris Jobber Jeffes (1980-1982) - Itchen Abbas Winchester Hants UK -  Hi there to all fellow Faraday FIDS - looking to catch up with Neil 'Runner' Shaw, Len Airey and Geraint 'Pint' Hughes. Great pub just down the road in case any passing FIDS want to while away an evening with some Antarctic tales...

David Jobes (1985) - Malaysia.   I spent some time at Faraday before wintering at Rothera during the rebuild in the 1980`s. I work in the oil and gas industry now and I am currently living and working in Malaysia as an electrical commissioning engineer.

Neil Richardson (1986) Kendal  email  Glacier fluctuation mapping 1986/7 around the Peninsular. Now running Spatial Data Ltd Chartered Land Surveyors. Three chidren and hoping to get back into sailing soon. Please get in touch if you remember me.

Nigel Dean (1990)- Turkey email  Now have own company managing Yachts in Turkey, married with one child

John 'JJ' Jones (1994/95) - UK / Turkey  Construction Worker for Summer season. Genny Shed, Boat Shed, Water Treatment Room, Concrete bases for Bonner Lab and Accommodation block. After the birth of my son, Antarctica, the next best 'Sight' in my life. Thanks to BAS. 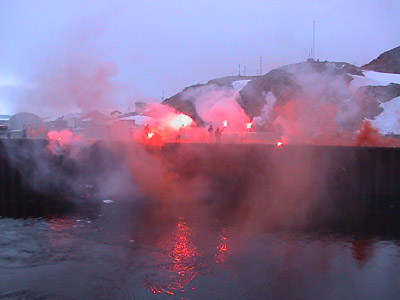 Eirian Jones "Sbonge" (2002/3) - Aberystwyth   Summer plant operator on base, dying to get back to Antarctica.

Tony McLaughlan (Tony Mac) (2009) - Rothera   I finish my winter tour in March, when I shall be going home to Luton, Bedfordshire, England after the most amazing and memorable 16 months in Antarctica.

Ludger Zikking (Rothera 2017 and 2018) - Amsterdam the Netherlands   Worked as a genny mech during the summer on Rothera.