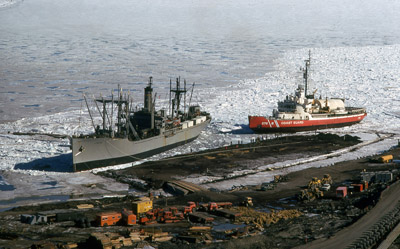 Jeff Barstow (1970-71) - Rodney, Michigan, US   Further comments: Ran electronic stores for the year I was there.

John Da Wolf Wolfe (McMurdo, Palmer, Hero - 1972) - Green Bay WI  Winter over 71-72 at the Transmitter site with Butch Crandall (deceased), John Porter and Terry Nichols. Helped set up WASA radio station and was one of the DJ's through the winter. Married Bob May's (YN1) stepdaughter. Wintered at Palmer in 81 and was the radio operator on the R/V Hero in 82.

Larry R Densman Ret RMCMSW (WO 78) - Friendswood, Texas Had the pleasure of working with Billy Baker during one of his summer support periods.  Also was initiated to RMC During the winter.  The chapel burned down during the winter. We were the last Det Alfa.

Ed Fack (75-76) -  Sheridan, Wyoming   Cook preparation, worked for Tidewater Management 1975-1976. Worked with Scott from Norfolk Va. Only two cooks that took the winter over survival course from Kiwi trainers (which the Seabee Officers didn't know). Our company was fired but Scott and I plus 4 others trained the new Kiwi workers. Any cooks out there???

Robert L. Fish (McMurdo - 1973) - Cochranton PA email  AG2 in 1973. Was accepted for WO but they cut my billet while I was on the ice. They wanted to transfer me to summer support but I chose to go back to the fleet.

Brian "Broke Dick" Fogg, RMC (W/O 1971-1972) - Richmond, Virginia, USA   Does anyone have a photo of the wall plaque that I made? .. it's the one with the eagle at the top. It was on the wall of the admin/communications building. Thanks - Brian (RMC Ret)

John Gasperetti (1974-1974, 1982-1984) - Renton, Washington   I was stationed with the Seabees during the 1974-75 and 1982-1984 summer seasons. I ran the bake shop in the evening and would like to get in contact with all others that were there during that time frame. Great times, great people and of course great parties! My daughter actually went there a few years back working for Raytheon, had a great experience.

Bob Gabby Gaboury (W/O 74/75) - Camarillo, California USA   Wintered Over 74/75 as a CEC running the Power Plant, Dick Masters was the Leading CE1, Great crew Lowest winter over party to date There were, if I remember right about 65 of us. Best to all - Gabby.

Bill George CM2 (Williams Field /Summer, McMurdo/Winter- WO '69-70) - South Lyon, MI    Spent the summer at Williams Field in Public Works. We had the nicest hut (jamesway) on the base. Wood paneling in our lounge, separate personal cubicles for racks, and an indoor urinal in the vestibule. The cooks were always giving us a case of lobster tails because we serviced their reefers and snow melter.

Lito A. Geslani (Antarctic Devron Six, 1970 - 1971) - Manila, Philippines  I am Lito A. Geslani 64 years old now and I was on the last flight of "Pegasus" on Oct. 8, 1970 aboard C121J that crash landed in Antarctica that affected my life and career. Would appreciate more information about the accident and wish to have communications with other members who were on that flight also because my memory is deteriorating. Thank you

Joseph R. Gogel (1970-1971) - Ferdinand, IN USA. Wintered Over at McMurdo DF71 as AG1 along with AG2 Thomas J. Hoffman and AG2 Robin Seib. Am currently assembling a roster of all Aerographers and Metrological Officers that were on the "Ice" between 1955 - 1999, please .

Don Hay (1978) - Elmer NJ USA   RM2 during the 78/79 winter over period, spent the winter in the Firehouse. Looking for fellow members that wintered over during this same time to catch up.

Brian Hayek (1971-72) - Ballwin MO  CE2, worked doing electrical maintenance.  Was part of the crew that opened/closed Willie Field.  Lived in the power plant.  Spent time in the photo lab, and in the Sat Track station using their radio gear as WA9FAB/KC4 and running phone patches. 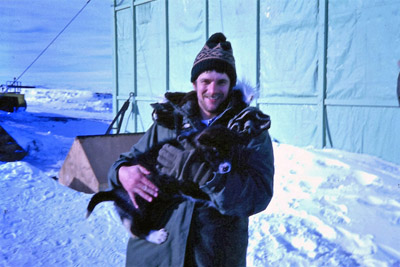 David Hirn (McMurdo Station and Byrd Station - 1971, 1972) - Sturgeon Bay, WI    U.S. Navy - Radioman Summer Support 71-72 McMurdo Station. 72-73 Byrd Station. 73 returned to Seattle via USCGC Staten Island (Thanks to Chief Brown). Thanks too to the guys at Scott Base for their Wednesday night phone patches back to Christchurch.

Michael Jacobs (1974-75) - Albuquerque, NM    I was in Combat Camera Group on temporary duty in Antarctica for the opening of the new South Pole Station (Jan 1975). I was considered the official US Navy photographer on the Ice.

Michael Jordan (McMurdo Station - 1971/1972) - Chillicothe, Ohio USA -  I was with Operation Deep Freeze 71-72 and was stationed at Willy field crash crew during the summer and was the first crew to winter over in the new fire station. I was a HT3 and took care of equipment and drove fire truck 2.

Jim Igor Kaelin (McMurdo & Willie Field - Winterover 1977) - Park Hills, KY    CM2 Spent the summer at Willie Field and the winter in McMurdo. Had a great time on the "Ice" and met made friends with some great people. 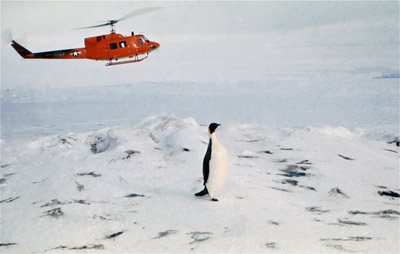 John Muff Maffin (McMurdo - 75-78) - McMinnville, Oregon   RM2, Summer Support 75-78, Winter Over 76, HAM and MARS ops. Went to the most isolated place on Earth to get away from women, and met my wife there. Small world.

John Maxey (1971 - 1972) - Taylor  I was in winter over '71. Radio operator but volunteered to galley duty for the duration. Might say permanent mess cook. Have not seen anyone since i came back home.

Robert E. Miller (1970, 1971) - Okinawa, Japan   MSgt. USMC/Loadmaster. Had the cargo division at McMurdo. Great group of people. One of the high lights of my military career. Still wear by VXE6 ball cap and have the "Pucker Penguin" patches on my vest.  Semper Fi.

Kip Parker ET (1974-1976) - Vandergrift Pa -  - Was to winterover but USN cut half of force out so I took summer support instead of new orders. very glad I did as it was my best duty . We beat VXE6 for the volleyball championship! ET shop and XMTR site had ETC Parker, ETC Para, ET1 Thomas, ET1 Peterman, ET1 Fuller, ET1 Robinson, ET1 Linder, ET1 Klinger, ET2 Churchfield, ET2 Parker, ET3 Bolton, ET3 Porter, RT3 Stephenson, ET2 Draper, ET2 Lochman and I know there were others but I can't remember. Well it was a great time, one I will never forget! any of you guys out there?

William Duane Peverill - Pony (Winter Over 1970, McMurdo KC4USV/N0ICE) - Fresno, California   In charge of the Ham Shack. Great Times and Great Friends. We have a reunion every two years.

Paul Sawyer (McMurdo - Winter Over 71) - South Lake Tahoe CA - Was a corpsman at the McMurdo dispensary. Helped build the bowling alley and worked there as a pinsetter.

Richard Stark (1972) - Henderson -    RM (radioman) best part of my duties- reaching  out to short wave operators around the world. Seeing my shipmates faces when they hear loved ones voices so fare away thanks to cbs operators sparkie that me.

Jim Stilburn (1970-71) - Victoria BC, Canada    I was the operator of the McDonnell -Douglas riometer facility from Nov 70 to Dec 71.  This was a one-man facility on the north side of the twin craters, near where the Radarsat dome now sits. 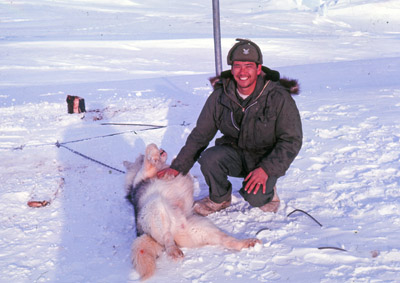 Jim Webb (1970) - Estes Park Colorado    USARP, KC4AAE radio phone patches for the winter over gang. Lived up on Arrival Heights most of the time. Any one know where my old building went after 1970?

Mark Webster (Operation Deep Freeze - McMurdo 79  to 80, Winter Over 80) - Lees Summit MO   Looking to locate over Winter Overs from my group from McMurdo. Trying to get together Reunion.

Steve Wendt (Winter over 74) -  Indianapolis Indiana -    Retired navy in 1993 as a Seabee Diver.  Retired from second career on 2016.  Would love to go back as a 19 year old kid the experience was tremendous for me.

Robert F Willy Wilson (72-73) - Wilsonville, Alabama  In 64/65 I was crash crew out willy field for the summer. For the winter I went into town and was in the fire dept. with D W Olsen as the fire chief. In 72/73 I was in public works as the senior EO .My crew had to maintain all the roads in the camp. we also had to build the snow runway for Winfly to land on. We also built the ice runway for the wheeled aircraft to land on. I sure enjoy my two winter/over tours and would do it again if they would let old farts do it again.

Bill Ypsilanti "Bear" (1970) - McMurdo Transmitter Site - Mesa, Arizona  Why of you OAE's making a trip to Arizona, give me a call. Frankly after a year on the ICE, why wouldn't you live in Arizona?