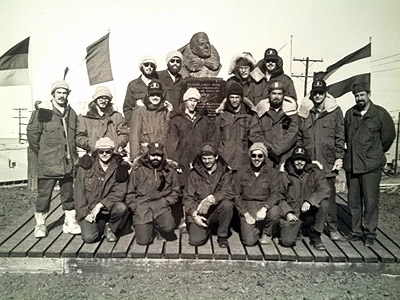 Robin Ardalan (1987-1988) - Grants Pass  Looking for past co workers and friends.. A yearbook from this time and maybe memorabilia too. I lost my home to a fire and this was an amazing time in my life I would like to replace some memories.

Bruce L. Beardsley, Radioman, "BB"  (1980-85) - Loveland, Colorado  Worked the Message Center, Savin Copier and Teletypewriter Repair, Mars shack Manager/Operator for three seasons, Winfly 82, 83, 84. Assisted in Homeport 85 prior to transferring in Dec. Met a lot of good people, Military and Civilian alike. Wouldn't have missed it for the world. Would love to go back again.

Peter Breen (Scott Base, McMurdo - 1981-1982) - Rotorua    Was Scott Base staff spent a lot of time in Mac town working and socialising especially at Jessie Raines bar.

Kimberly Brown (1986 -1987) - Denver, Colorado    Winter Over Crew 1986-1987. I worked as a Draftsperson, Construction Coordinator, Electricians Helper, and SAR Team member. Hello to all that the adventurous souls who wintered over! I still remember the winter-over softball games, trips to Black Island, and weekend trips to the Ski Chalet.

Charles Chad Condrotte (McMurdo, Christchurch, Port Hueneme CA - 1979 through 1983) - Flagstaff AZ   I was the Navy Dental Technician at McMurdo on four summer support deployments from 1979 through 1983. I also returned to the U.S. aboard the Coast Guard Ice Breakers Glacier and Polar Sea.

Diane Dugger (1987 and 1988) - New Vernon, NJ, USA  Would like to find my friends Ann Davis, Anna (sorry can't remember her last name) and Lisa Fedderoff. I hope they find this and will contact me!

Mikell D. Dyer, "Mike / Chap" (1993/94) - Pomaria, SC, USA  I was the only US Navy Data Processing Tech. (First Class) supporting all the PC and Mainframe computers with he help of a junior Petty Officer. I got the nickname of "CHAPS" because I was the Lay Minister that preached each Sunday and held a bible study. What a GREAT time !!!! However, I missed the birth of my only child on 12/10/1993. But, everything worked out for the best. I would go back again if asked :)

Larry Estes "Sweet Pea" (McMurdo 1980-81) - North Richland Hills, Texas  Wintered over during the 80-81 season. One of the best thing God allowed me to do and see. Took a ton of slides, wish I could get them all digitized.

Clark Ferguson (Winter Over 1981 McMurdo WD Plant) -  BT2 W/O 1981 at the Water Distillation Plant (WD Plant) and worked with the outside plumbing crew.

Eric Foresman (NSFA McMurdo, WO -87 88) - Iowa USA  I was the winter over fire chief with a great crew, Kenny, OBO, Tom, Scott, Eschete.  A great adventure for my last year on active duty.

Peter Gasparik (83-86) - Staten Island   Spent 4 awesome summer's as a Radioman, worked our butts off and partied just as hard, miss it all from hut 10, the Erebus club to det Christchurch.. Good times and memories.

John Gasperetti (1974-1974, 1982-1984) - Renton, Washington  email  I was stationed with the Seabees during the 1974-75 and 1982-1984 summer seasons. I ran the bake shop in the evening and would like to get in contact with all others that were there during that time frame. Great times, great people and of course great parties! My daughter actually went there a few years back working for Raytheon, had a great experience.

Brian Graham or Guntha (Willy Field and McMurdo RNZAF - 1981) - Pukekohe New Zealand,   Worked with  the aircraft loading team in 72 flew with VXE6 as exchange load master in 81. Many other visits with the RNZAF.

Grampa (McMurdo 1984 Winter Over Team) - Sun City Center FL   Lots of great memories in an unique place that only a handful of folks have had the pleasure to experience both summer and winter in remote location on earth.

Paul Green (Terminal Operations US Army 1985-86) - Temecula   I volunteered for Operation Deep Freeze II from 1985 - 1986.  I worked in Terminal Operations.  I also worked as one of the TV Broadcasters as well as worked on the cruise book committee.  I still have my old cruise book.  It was one of my favorite memories.  I'm also friends with one of my fellow army buddies who also volunteered.  Looking for others that served during this time. 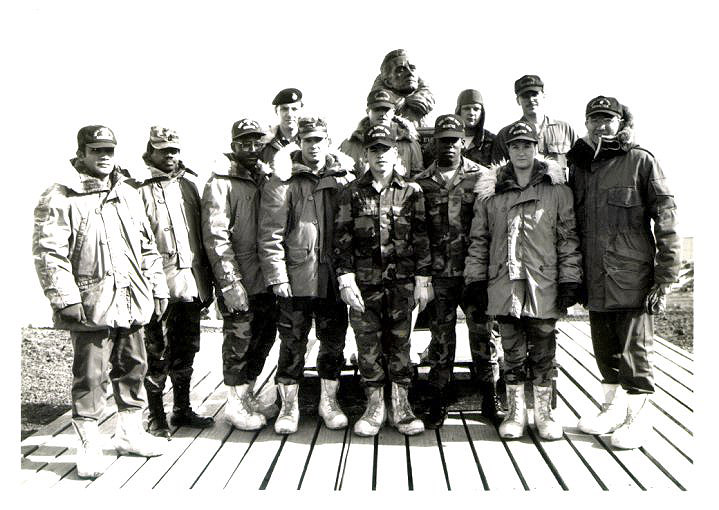 William Bill T Gunn Jr (NSF Antarctica Year/s 86-87) - Tennessee USA  Coming up on 30 years since I wintered over, would do it again in a heartbeat! ET1, 200 Degree Club, first married couple to w/o, met SecNav, signed the OPS Hill log book, went skydiving in New Zealand, slept on the ice at Williams field, bartender, rock and roll radio broadcaster, and all around good guy. Pictures, stories, etc. for trade.

Ed Holton (1987 - 1991) - Douglas, AZ, USA. NSFA Medical. email  I was Leading Petty Officer of NSFA Medical from 1987 through 1991 and made 4 deployments. My last time was spent as the Senior Medical Dept. rep in Christchurch. I would like to hear from any shipmates that were there at that time, as well as any current personnel of McMurdo medical. I was the last Navy X-Ray Tech permanently assigned to NSFA Summer Support.

RM Charlie Johnson (Winter Over 80-81) - Mt Clemens Michigan  The best Radioman gang in the World... Thanks Don and Chief.

RM1 RMC Cheryl Perez King (McMurdo - 1989, 1990 Winter Over Crew) - Maine email  Retired in 1996 as E8, went on to serve in the Veterans Administration as a Social Worker. I have such fond memories of Antarctica! It was an adventure of a lifetime.

Kenneth Leckie (McMurdo, Christchurch, 81 - 83) - Fort Smith, AR   I was a Builder with summer support. I Loved it, would like to go back in a heartbeat.

Jesus Lozano (W/O 87/88) - San Antonio, TX USA   33rd W/O. Had a great time with everyone down there, would like to know if anyone has pictures of me flying my kite, at midway point , between McMurdo and Williams Field, during Fuel transfer?

Todd McDonald (McMurdo Station - 1981, Winter 1982) - Orange Park Florida - Aerographer (Weather) for Summer, then was last minute Winter Over 1982. Put together a WO82 Yearbook. Wonder who still has one.

Mike Mullen (NFSA McMurdo USCGC Glacier, 1980-84) - Grand Prairie, Texas  Best tour of duty during 23 years of Naval Service. Many memories and long lasting friends due to this assignment. It was great being a Navy Photographer assigned to NFSA. It was almost like being on a 4 year vacation.

Karen Roberts Francis (1981-82) - Georgetown TX   I was a Hospital Corpsman at McMurdo Clinic from Sep 81-Feb 82. Retired from USNR as HMC and from my "civvie" job in Sep 2015. McMurdo was the best adventure ever and I'd go back in a heartbeat. Would love to chat with anyone from that time period.

Elizabeth Slizz Linsey (McMurdo 85 to 94 and Palmer w/o 92) - Aberdeen North Carolina    Loved my time on the ice. Love to hear from ice friends.

Shona Smith nee Hastie (McMurdo - 89 to 94) - Brisbane, Australia    I worked/lived in MacTown a number of Summer/Winfly seasons as well as a Winter-over.

Dale Stansbury (McMurdo - 19881989) - Bremerton Wa   Looking for members of the W.I.P.P crew that summer. Barry, Pablo, Leroy, Danny, etc. Also would like a picture of the plaque inside the chapel with the "God Squad " on it if it still exists.

Gary B. Stanton (Fort Eustis Virginia I was a stupid door McMurdo - 1981) - Chuckey,  I like to have a  certificate showing I was in the south pole in 1980 or 81/82 I forget which it is for the summer season at McMurdo man burn up in a fire and I'd like to have it but if I could get one of those picture diagrams of four they give you when you get yourself certificate please contact me on my email address

Gene Starks (w/o 1987,1988,1990 and 1991) - Sacramento Ca.    Miss the Ice a lot tried to return several times but due to heart disease that's not possible, remember building the dorms 207and206, dismantling several T-5s, jamesways, working on installing the rolling overhead doors in the heavyshop, may other construction projects, trips to Black Island, and the dry valleys. John Cummings, C.J. Ringlieb, Nate Sheldon and myself were the first to work back to back winters, now I see its common. First winter was the hardest but also the most memorable. Oh yeah hello to Al Martin, and Kim Brown.

Jim Terrace (1983) - Madison Ohio -  w/o 83 worked in the boiler room wise choice it was cold that year like to hear from some of the group best times ever.

Mark Webster (Operation Deep Freeze - McMurdo 79  to 80, Winter Over 80) - Lees Summit MO   Looking to locate over Winter Overs from my group from McMurdo. Trying to get together Reunion.