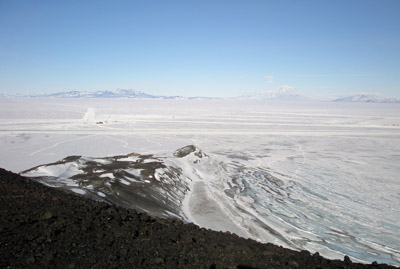 Looking down on Hut Point - view from Hut Ridge Trail.

Greg Albert (Beardmore South Camp 1990-91) - Belmont, MS   AG2 Upper-Air supervisor and assistant forecaster. Worked in ops. Went to Beadmore to open it up with Mike Dera and crew for about 8 weeks.

Kristy Carney (McMurdo, 1997 to present and still counting plus 1 winter 2005) - Littleton, Colorado  Started off working in the Skua Deli, and then in Fleetops, The South Pole Traverse, and science traverse (WISSARD) as a heavy equipment operator.

Bob "Space-Puppy" Horneij (W/O 1989-1990) - Nashville, TN  Loved being stationed in McMurdo for winter Over 89-90. Can't explain it in words when I try to tell someone about the experience. They mostly think I was crazy to volunteer to go there! :)

Peter van Kampen (PvK) (1990) - Switzerland  Down in Antarctica with the NZ Huey crew (Aircraft tech at McMurdo). Actually trying to locate "Mouse" from VXE-6 and Point Mugu Ca. 20 years on.

RM1 RMC Cheryl Perez King (McMurdo - 1989, 1990 Winter Over Crew) - Maine email  Retired in 1996 as E8, went on to serve in the Veterans Administration as a Social Worker. I have such fond memories of Antarctica! It was an adventure of a lifetime.

Ben Koontz (1993, 1994, 1995) - Perry, Utah Worked in Waste Management, Equipment ops and warehouse. loved my time at McMurdo especially both winters I spent there.

Elizabeth Slizz Linsey (McMurdo 85 to 94 and Palmer w/o 92) - Aberdeen North Carolina    Loved my time on the ice. Love to hear from ice friends.

Ed Matheson - Mister Ed (1989,1990,1991) - Portland, Or. US of A  I flew in on the 1st C-5 flight into The Ice in 1989, spent 3 summers working out of the MEC as a science support mechanic. Flew out to remote camps many times and thoroughly enjoyed the experience. Got out to several of the historic hut sites, the Dry Valleys, and made the tourist turnaround to the South Pole Station. Was bestowed with the honor of Mr. Icestock for the endurance I displayed moshing with the best of them...My brother Don, followed my lead, and worked the Heavy Shop and as machinist from '90 to '92. Good times...

Brian "Doc" Newhouse (McMurdo and Byrd Surface Camp, 1994-95) - Florida    USN Corpsman, cross trained with the AG's at Mac Weather and the Ice Runway before going to Byrd. First in last out at Byrd in 1994-95. Great bunch of guys and gals, Would love to go back.

Michelle McOmie  (SK2) (NSFA - 1989 to 1993 Summer Support, 4 Deployments) - Hastings MN  Spent 4 Summer Seasons in McMurdo, working the supply chain (GSK, Cold Storage, Gas Bottle yard, Haz. warehouse).  Many fun times were had by all.  I am lucky to have been apart of it!

Tom O'Brien (McMurdo Station, 1989 - 1990) - Gulfport MS, email 34th Winter Over crew. Oct 1998 to Oct 1990. 1st year they cut the Seabees down to a handful. Just 2 CM’s, 3 EO’s, 1 EA, and 1 BU Chief. No CE’s or UT’s that I can remember that Wintered Over with us. Big almost fatal accident with Laura going through the ice in a dozer, but thank god she escaped and made it back to the surface. If you do not remember me I ran the ham shack during the Winter Over time.

Joe Pettit (McMurdo and Palmer - 1990 through 2016 seasons) - Longmont Colorado USA -  Twenty five seasons in Antarctica and counting, including six winters.  Spent time at McMurdo and Palmer Stations in a variety of great jobs.

Shona Smith nee Hastie (McMurdo - 89 to 94) - Brisbane, Australia    I worked/lived in MacTown a number of Summer/Winfly seasons as well as a Winter-over.