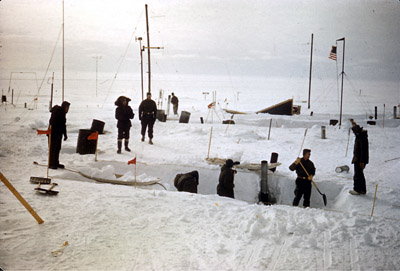 Rowland Bliss (ASA - 1961) - Stafford, CT USA      In 1961 ASA stood for Antarctic Support Activities, It was a Seabee outfit, we were summer support based in Davisville, RI. I was stationed at Williams field. We hauled freight off the ships up to McMurdo Station. In February 1962 I broke my leg at McMurdo Station and was flown to Christchurch NZ, then to Oahu ,Trippler Army Hospital. I finally ended up in Newport Naval Hospital.

Earl Griffith - Griff (McMurdo, Beardmore, Hallett - 1970-1973) - Helena, Montana   I was assigned to the firehouse gang at McMurdo for a couple of months until I made grade to AG-3, then on to Beardmore Glacier to take weather obs. Finally got sent to Hallett in Jan 71 and spent the next two seasons there. We closed the station in Feb 73. Capt. Van Reeth allowed me to keep the last American flag that flew over the station while still an active US Navy base. The Ice was the best damn tour in the Navy. Good people, good friends.

Howard Hanson - Hans (McMurdo and Hallett Stations, 1967-1969) - West Springfield MA USA   I was an ET at McMurdo and then the station ET at Hallett for two summers.

Jim Igor Kaelin (McMurdo & Willie Field - Winterover 1977) - Park Hills, KY    CM2 Spent the summer at Willie Field and the winter in McMurdo. Had a great time on the "Ice" and met made friends with some great people.

Bob Manke (Red)UT2 (Byrd Nov '59 - Dec '60) - Pendleton, NY USA  Is there any other Seabees or other naval people from those years still around?

Clyde McCauley (Ellsworth station - 1957-58) - Key West FL  Spent many days shoveling snow for drinking, cooking, bathing. Did my share of mess duties, Working on D-4, D-8. Helped replace broken track on D-8 with Walt Davis, and my fingers still don't like cold weather. name is on a small rock (over 1,000 m high) over there. Would do it again. Great group of people. Loved to use Ham gear to talk to the outside world during the long dark winter.

Robert J. Moffat "Bob" (Ellsworth Station- McMurdo - 1/58-3/59 10/65-10/66) - Meridian, Id. USA    Had a good time at Ellsworth. I WAS A CE1 at the time. There were 6 Seabees as part of the crew, with a Ensign CEC officer in charge. A Navy Lt. was the OIC, Lt Paul Tidd. He was the the helo pilot.  I was stationed at Ellsworth for the winter of 1958. I was one of 30 navy, and 10 civil types, we were supporting  . I was a construction electrician, first class. i have a mountain named for me. The trip was one of my top duty stations of my naval career. We had a good year with no big problems. we had a naval lt for our  oic, a dr. 2 navy pilots, and a civil engineer , who was my officer in charge. Our only comms with the outside world was by ham radio.  No mail in or out. When we departed in March of 59 The station was turned over to the Argentine Navy.

Gerald (GJ) Miller (McMurdo PM3A - 1963 and 1969) - Grapeview USA    I am the grandson of CWO GJ Miller USN Seabee who operated the PM3A plant for the navy nuclear program. And I don't want his legacy to be forgotten.

Darrell Richards (CBU201 1967-68) - Watsontown Pa  Have many photos from summer seasons.  1 of Lt. Gibbs  on guitar with group I believe celebrating Christmas 67.

Mike St. Pierre (McMurdo / New Byrd, 59 / 60 / 61)   Hernando, FL. I was sent to Davisville right out of high school. The unit then was MCB special. I had no idea it was operation Deep Freeze. I spent the first summer at McMurdo, and the second at Byrd building the New Byrd.

Steve Wendt (Winter over 74) -  Indianapolis Indiana, Retired navy in 1993 as a Seabee Diver.  Retired from second career on 2016.  Would love to go back as a 19 year old kid the experience was tremendous for me.

Thom Wilborn (Antarctic Support Activities (ASA) - 1971-1972) - Washington, DC   I was the ASA Journalist who ran the radio station (WASA) and newspaper (ASA Sometimes). I would like to thank all the volunteers who kept the radio station going all-day, everyday during Summer Support. I'd also like to thank the Seabees who helped me with the artwork and cartoon masthead for the "Sometimes." They deserve the full credit for bringing bits of home to all the guys on the Ice. Thanks to Jorge Raviero, Jack Frost and Andy Anderson who made such interesting stories published back home. My deepest thanks and since appreciation to Capt. Eugene Van Reeth and the late Commander Robert "Bouncing Bobby" Balchunus, the best CO and XO anyone could ever have. Also thanks to the galley crew for giving us the best food in the Navy. I can't remember all your names, but for Al Bray and Don Jackson, you were the best shipmates and friends I ever had.

I'm looking for anyone who served with my Dad. Commander Archer E. Church I believe he was a part of TF-43. He was a Seabee serving as Assistant Chief of Staff/Civil Engineers/US Naval Supply Force. He died in 2006. I actually remember talking with him via short wave radio while deployed on the "ice". He was a part of an emergency group flying fuel to save the winter team that was about to run out of fuel. It was either 67 or 68. They flew 22hr's straight and he was awarded with a Naval commendation of some sort for that mission. He has a place In Antarctica, known as Church Ridge named in his honor. My one regret is not being old enough at that time to have the same interest in his work in Antarctica, as I have today at 66. Arch was a wonderful dad and grandfather to my children, a dedicated Naval Officer, and we still miss him greatly. Anyone who either served with Arch or has any information about his time served on the "ice" would be greatly appreciated. Bob Leyshion, Jr., Solon Maine email Mar '21